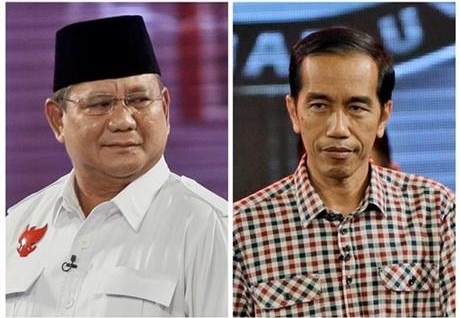 By The Associated Press

JAKARTA, Indonesia — The rival candidates in Indonesia’s presidential election each claimed victory Wednesday, raising uncertainty about the political and legal landscape in a nation that made the transition from dictatorship to democracy less than two decades ago.

According to the three most reputable quick-count surveys, soft-spoken Jakarta Gov. Joko Widodo won the election in Southeast Asia’s largest economy with 52 percent of the vote, but his Suharto-era opponent, Prabowo Subianto, said other data indicated he had won. Widodo is the first candidate in an Indonesian direct presidential election with no connection to former dictator Suharto’s 1966-1998 regime and its excesses.

The quick counts tally a representative sample of votes cast around the country and have accurately forecast the results of every Indonesian national election since 2004, including this past April’s parliamentary polls. It will be around two weeks before votes are officially tallied and the results announced in Indonesia, a country of 240 million people and the world’s most populous Muslim nation.

But Subianto — a general in the Suharto regime and the late dictator’s former son-in-law — said he had different quick-count data showing he had won.

“Thank God, all the data from the quick counts show that we, Prabowo-Hatta, gained the people’s trust,” Subianto told a news conference, referring to his running mate, Hatta Rajasa.

“We ask all the coalition’s supporters and Indonesian people to guard and escort this victory until the official count” by the election commission, Subianto said.

Later, he told supporters that his opponent went too far by giving a victory speech, saying “a true warrior does not need to show off his strength,” while adding that his camp is not weak and has not given up.

Outgoing President Susilo Bambang Yudhoyono urged both sides to “restrain themselves” and not allow their supporters to publicly declare victory until the election commission decides the winner. Yudhoyono, also a general in the Suharto regime, was elected president in 2004. He served two five-year terms and was prevented by the constitution from seeking re-election.

Widodo’s appeal is that despite a lack of experience in national politics, he is seen as a man of the people who wants to advance democratic reforms and is untainted by the often corrupt military and business elite that has run Indonesia for decades. Subianto, meanwhile, had a dubious human rights record during his military career, but is seen as a strong and decisive leader.

Just a couple of months ago, the election was considered firmly in favor of Widodo, 53, who rose from humble beginnings to become the governor of Jakarta in 2012. But Subianto, 62, led a late surge after picking up endorsements from most of the country’s major political parties and running an efficient ground campaign.

Natalia Soebagjo, chair of Transparency International’s executive board in Indonesia, said it was reckless for either candidate to declare victory before the official results are announced. She said that the three most reputable quick-count results showed Widodo as the leader, and that she did not trust the surveys Subianto had cited.

“If this continues, I predict in the next 10 days we might see trouble,” she said.

“They can contest it in legal terms and in social terms by creating unrest,” Soebagjo added. “It all depends on what these candidates really want. Is their thirst for power so great that they would want to fight it out to the death?”

The two candidates are vastly different in their policies and styles. Widodo likes to wear sneakers and casual plaid shirts, listen to heavy metal music and make impromptu visits to the slums.

Subianto is known for his thundering campaign speeches, a penchant for luxury cars and having trotted up to one campaign rally on an expensive horse. He has the support of Indonesia’s most hard-line Islamic parties and has sparked concern among foreign investors worried about protectionism and a possible return to more authoritative policies.

The campaign period was marred by smear tactics, known here as black campaigns, from both camps. But Widodo blamed his fall in opinion polls from a lead of more than 12 percentage points in May to around 3.5 points before the election on character assaults that accused him, among other things, of not being a follower of Islam. He has denounced the charges as lies, but says it’s hard to undo the damage they caused.

At the same time, Subianto’s campaign was more effective and better financed. He also enjoyed the support of two of the country’s largest television stations.

“I think these black campaigns were effective enough to convince communities,” said Hamdi Muluk, a political analyst from the University of Indonesia. “And that has directly ruined Widodo’s image.”

But he added that Subianto’s past, including ordering the kidnappings of pro-democracy activists prior to Suharto’s fall in 1998, has not gone unnoticed and that some voters fear a return to the brutal late dictator’s New Order regime. Details about the abductions surfaced recently after the official findings of an army investigative panel were leaked.

The election — Indonesia’s third direct presidential vote — has played out with fury in the social media-crazed country. There has been a frenzy of “unfriending” on Facebook pages belonging to users who support different camps.

Subianto, of the Great Indonesia Movement Party, has been gaining allies. Outgoing President Yudhoyono’s ruling Democratic Party, which earlier in the campaign said it was neutral, openly endorsed Subianto just two weeks before the election.

Subianto’s vows of tough leadership and promises that “Indonesia will become an Asian tiger once again” also gained footing with some voters fed up with Yudhoyono, who has been criticized for being ineffective and weak on some issues, including those involving neighbors Australia and Malaysia. Yudhoyono’s party also has been plagued by a string of recent high-profile corruption scandals.