Europe has had a growing anti-Semitism problem for years now 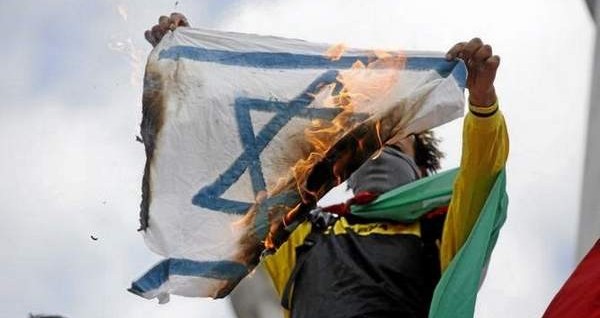 Europe has had a growing anti-Semitism problem for years now

Many news outlets, including the New York Times, are reporting that — since Israel launched its military operation against Hamas on June 8 — there have been alarming spikes in incidents of anti-Semitism across Europe.

This is true. But there’s an even scarier truth: Europe has had a growing anti-Semitism problem for years now.

There’s good reason to be worried about all this. Europe has a rich history of fascism and Nazism, and of mass murdering Jews. The governments in Germany, France, and Italy were all so collectively freaked out about recent upticks in vitriol directed at Jews that they issued a joint statement on July 22: “Anti-Semitic rhetoric and hostility against Jews, attacks on people of Jewish belief and synagogues have no place in our societies,” they said, in glorious unison.

In the United Kingdom alone, there were 130 anti-Semitic incidents in the month of July. That was the highest monthly total since February 2009. It’s hard to imagine that’s a coincidence. And most European countries have had at least one or two isolated anti-Semitic incidents since the start of the Gaza conflict.

Many of them were connected to pro-Palestinian protests, which would suggest that the acts were direct responses to the conflict itself. During protests in France and Germany, for example, fringe extremists have attacked Jews, synagogues, and Jewish-owned businesses. Elsewhere around the world, protests against Israel’s operation in Gaza have turned ugly, with anti-Semitic signs, chants, and incidents of harassment, suggesting that people really are converting their anger about Gaza into anti-Semitic behavior.

Some of the more isolated anti-Semitic incidents were obvious responses to the current conflict. On July 30, for example, a doctor in Antwerp, Belgium rejected a Jewish patient, telling the woman’s son, “send her to Gaza a few hours, then she’ll get rid of her pain.”

Others are more subtle but are still hard to view outside the context of the conflict. On July 18, someone threw a brick through a synagogue window in Belfast, Northern Ireland. On July 31, someone vandalized the main synagogue in Malmo, Sweden and then, on Aug. 2, assailants yelling “fucking Jews” attacked a rabbi, again in Malmo. On July 26, vandals graffitied walls in Rome’s historic Jewish quarter with anti-Semitic messages, including swastikas and the phrase “Anne Frank Storyteller,” which we can assume is a very thinly veiled claim that the Holocaust never happened.

The Anti-Defamation League maintains a list of these incidents, and most of the countries it tracks have made the ADL’s list at least once since July 8. So it’s clear the conflict is having an effect.

But these are only the latest incidents in a long-developing trend. Europe has had a growing anti-Semitism problem for years now. It’s just clearer to see these days under the bright media lights of the Gaza conflict.

In 2013, the European Union Agency for Fundamental Rights published a troubling report about the prevalence of anti-Semitism in eight EU nations: Belgium, France, Germany, Hungary, Italy, Latvia, Sweden, and the United Kingdom. After interviewing nearly 6,000 self-identified European Jews, the FRA found that 66 percent considered anti-Semitism to be either a “very big problem” or a “fairly big problem” in Europe. France got the worst marks. Fifty-two percent of respondents said it was a “very big problem” and 33 percent a “fairly big problem.” Do the math and you’ve got 85 percent of French Jews considering anti-Semitism a problem in their country. Perhaps even more troubling: 76 percent of all European respondents thought the problem had worsened in the past five years.

And if you return to the ADL’s incident reports, and look back farther than July 8, you’ll find plenty to be concerned about. France has had several incidents since the start of the conflict, but there were also multiple incidents in the months leading up to it.

Anti-Semitism has been a growing issue in most of the countries monitored by the ADL. On March 10, someone in Stockholm vandalized a high school where Jewish students were taking classes. They painted a swastika as well as the phrases “Jewish swine” and “disgusting Jews.” In Italy, on Jan. 25, you’ll find a seemingly coordinated series of anti-Semitic acts in Rome. Someone mailed pigs’ heads to Rome’s main synagogue, the Jewish museum, and the Israeli Embassy. Elsewhere in Rome, someone painted anti-Semitic graffiti, including — again — swastikas and the phrase “Hanna [sic] Frank is a big liar.”

Experts give a range of explanations for the increase in anti-Jewish rhetoric, vandalism and attacks. They range from changing patterns of immigration (more immigrants coming from countries and regions with histories of virulent anti-Semitism), to the return of extreme right-wing political parties, to the ongoing, socially destabilizing recession that has stoked all sorts of toxic ideologies and xenophobia, including anti-Semitism.

For now, one thing is certain: Europe has an anti-Semitism problem.

Featured Image: A pro-Palestinian demonstrator holds up a burning Israeli flag on the Republique square in Paris, during a banned demonstration against Israel’s military operation in Gaza and in support of the Palestinian people, on July 26, 2014. (KENZO TRIBOUILLARD/AFP/Getty Images)