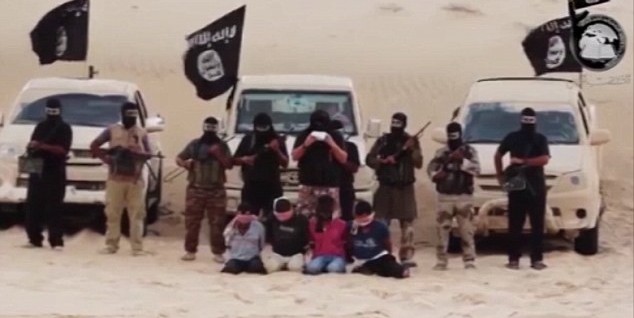 An al-Qaida-inspired militant group in Egypt has posted an online video showing the beheading of four men in the Sinai Peninsula accused of spying for Israel, whose bodies were found earlier this month.

The Ansar Beit al-Maqdis group, whose name means Champions of Jerusalem in Arabic, posted a 30-minute video showing detailed confessions of the four men. The four said that in exchange for money they helped Israel target the group’s members with drone strikes in the northern Sinai Peninsula.

Among those killed in the alleged strikes were Khaled el-Menaei, the brother of the group’s leader Shadi el-Menaei. Egyptian authorities have said Khaled and others were killed in clashes with security forces at the end of July.

But the video showed footage of burnt bodies of men identified as Khaled el-Menaei and his companions. After the confessions, the four men are blindfolded and beheaded by masked militants.

The video was posted on the group’s Twitter account early Thursday. An Egyptian security official confirmed the authenticity of the video. He spoke on condition of anonymity because he was not authorized to brief the press.

The group has in the past claimed responsibility for a string of suicide bombings targeting mainly Egyptian security forces, presenting the attacks as revenge for a government crackdown on Islamist supporters of ousted President Mohammed Morsi.

Ansar Beit al-Maqdis initially expressed allegiance to al-Qaida, but in recent months Shadi el-Menaei has praised the leader of the Islamic State extremist group rampaging across Syria and Iraq. That group, an al-Qaida breakaway, frequently publishes pictures and videos of beheadings and mass killings.

Featured Image: Ansar Bayt al-Maqdis, which has been described as Egypt’s most dangerous militant group, has released a shocking new video in which four men, accused of being Israeli Mossad spies, are beheaded. Copyright 2014, DailyMail