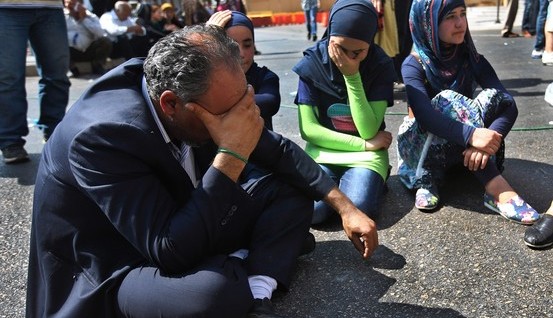 BEIRUT—Violence that has spilled over to Lebanon from neighboring Syria has widened in recent days to the country’s mostly Shiite Bekaa Valley, where a spate of kidnappings have further tested the restraint of Lebanon’s religious communities.

The flare-up comes as the recent beheading of a Lebanese government soldier captured along with 23 other troops has led to the kind of anger and finger-pointing that in the past has tipped this country of 5.8 million people into communal violence.

Islamic State fighters, along with rebels of the al Qaeda-linked Nusra Front, both of whom oppose Syrian President Bashar al-Assad, seized the Lebanese soldiers in August during fighting in the eastern Lebanese town of Arsal.

It was the first major spillover of Syrian fighting into Lebanon, but the insurgents were beaten back by Lebanese army forces after a five-day battle.

Hours after Ayman Sawwan, a Sunni Muslim, was taken hostage by unknown gunmen in the Bekaa Valley on Monday, his family blocked local roads and abducted 10 Shiites in retaliation, said Sheikh Ali Ayyoub, a local Sunni Muslim leader. The Lebanese army has intervened and gained the release of one of the 10 kidnapped men, but the standoff continued on Tuesday.

Mr. Ayyoub accused Hezbollah, the military and political movement that speaks for most of Lebanon’s Shiites, of responsibility for the escalating turmoil. “Here we are in an isolated area and we have no connection with Arsal, so why did they kidnap our young men?” he said. “If Hezbollah keep provoking the Shiite tribes to abduct our young men, the Sunnis will start reacting the same way.”

Lebanon’s Sunnis, Maronite Christians and Shiites have shown calm amid instability since the country’s 15-year civil war ended in 1990. The more than three-year-long Syrian civil war, however, has produced a combustible mix again in Lebanon. Hezbollah has been fighting alongside Mr. Assad’s forces—even as Sunni rebels battling them use Lebanon as a haven.

The cosmopolitanism that is the pride of Lebanese in more peaceful times is, under the stress of the Syrian war and its spillover, giving way to suspicions reminiscent of a more turbulent past.

At least one million Syrians have fled across the border to Lebanon, straining its social fabric to the breaking point.

The aftermath of the fighting has cast a lingering shadow. Nusra Front is demanding Hezbollah leave Syria in exchange for the seized soldiers. Islamic State, which controls a large territory encompassing eastern Syria and western and northern Iraq, says it will release the soldiers only when fellow Islamists held in Lebanon’s Roumieh Prison are freed.

It has already made good on its threat to start executing soldiers unless the prisoners are released. A video of the beheading of the Lebanese soldier, Ali Al Sayyed, was posted online on Aug. 28. His remains were later returned to Lebanon and identified by the government.

Photographs of the beheading of another soldier, Abbas Medlej, appeared on social media Saturday but haven’t been authenticated by Lebanese authorities.

Lebanese officials so far have refused to free the Islamists from Roumieh Prison but have promised to speed up trials of detainees awaiting trial. Qatar has offered to mediate between the two sides.

Many of Beirut’s neighborhoods are defined according to religion and sect, and in recent weeks gangs of men have been patrolling neighborhoods looking for people who don’t reside there, said Semaan Khawam, an artist of Armenian-Syrian origin based in the Bourj Hammoud neighborhood.

Mr. Khawam said he was attacked Saturday night by a group of eight men in a predominantly Maronite Christian district as he smoked a cigarette in a park. The men demanded his identification documents and assaulted him when he refused, he said.

“It’s not how you fix this problem, by beating every stranger who comes to your area,” Mr. Khawam said, his lower lip still blue from the attack. “Every area now has its own hooligans, its own security, its own gangs.”

Lebanese officials have acknowledged the growing public anger but have urged calm. Lebanese Prime Minister Tammam Salam warned in a speech on Sunday that the Islamic State wanted to exploit the country’s fragility.

Everywhere, though, there are jitters. After the battle for Arsal, Lebanese forces conducted dozens of raids and stepped up security searches, said Ninette Kelley, the Lebanon representative for the United Nations High Commissioner for Refugees.

“There’s increasing anxiety in Lebanon, and I think it pretty much affects everyone,” she said.

Featured Image: The family of a Lebanese soldier seized with others by Islamic State militants demonstrated in Beirut on Thursday to demand their release. Associated Press