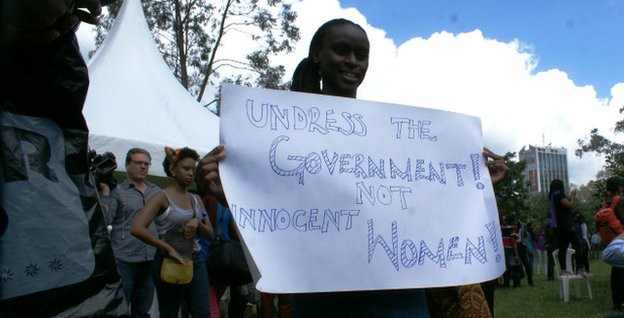 At least 200 people have protested in Kenya’s capital, Nairobi, after a group of men tore off a woman’s clothes for wearing a miniskirt.

The protesters chanted “Shame on you” and handed out flowers at a bus rank where the attack took place, the BBC’s Anne Soy reports from the scene.

At a rival demonstration, about 20 men chanted “Dress up. We don’t want this.”

Kenya is a conservative society, where activists complain that women’s rights are often violated, our reporter says.

A mother’s group, Kilimani Mums, organised the protest after a video of the attack went viral on social media last week.

It sparked outrage among Kenyans, with the hashtags #MydressMychoice and #strippingshame trending on Twitter on Saturday and Sunday, the local Daily Nation newspaper reports.

Deputy President William Ruto entered the debate, saying Kenya was not a “primitive” society and the men who stripped the woman should be arrested.

Both men and women, some dressed in miniskirts, marched to the bus rank and the offices of police chief David Kimaiyo, demanding an end to violence against women.

Rival protesters gathered outside Mr Kimaiyo’s office, and were joined by a conservative Christian group chanting: “We are a God-fearing nation.”.

Mr Kimaiyo has appealed to the unnamed woman to lodge an official complaint with police so that the incident can be investigated.

Featured Image: Activists say the government has not done enough to protect the rights of women. Copyright 2014, BBC