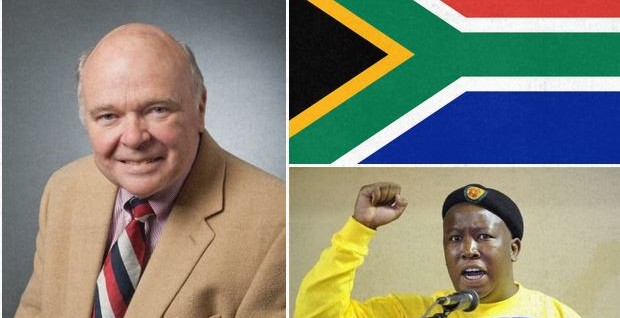 At a press conference at the Transvaal Agricultural Union today, Dr. Gregory Stanton, Founding President of Genocide Watch, warned that early warnings of genocide are still deep in South African society, though genocide has not begun.

Dr. Stanton was deeply involved in the Civil Rights Movement in the United States, worked against Apartheid with the United Democratic Front in 1989 – 1990 as a Fulbright Professor of Law at the University of Swaziland, and was the author of the UN Resolutions that created the International Criminal Tribunal for Rwanda in 1994.  He was also the legal advisor to the government of Cambodia and drafted the rules for the Khmer Rouge Tribunal.  He founded Genocide Watch and the International Alliance to End Genocide in 1999.  The Alliance now has fifty member organizations in 24 countries.

Genocide Watch was the first international human rights organization to protest the murders and hate crimes committed against farmers in South Africa.  Since his research trip in July 2012, Dr. Stanton said that hate crimes against Afrikaner farmers have not declined.  The murder rate of the whole South African population remains at over 31 per 100,000. The murder rate of farmers, including Afrikaner farmers, is four times as high.  The Institute of Security Studies estimated the farm murder rate at 120 per 100,000 in 2013, and the Transvaal Agricultural Union, using verified names of victims, placed the figure at 130 per 100,000 in 2013, one of the highest murder rates in the world.

Since 2007, the South African government has denied and covered up the crisis by not releasing any breakdown of how murders are distributed among ethnic groups in South Africa.  American and European governments have remained silent about the problem, reinforcing the campaign of denial.

Several years ago the Marxist racist, Julius Malema, then President of the African National Congress Youth League, revived the singing of the “Shoot the Farmer, Kill the Boer” song, once a revolutionary song, but now an incitement to commit genocide.  A South African judge declared that singing of the song is a hate crime and prohibited Malema from singing the “Kill the Boer” song.  But then the South African President, Jacob Zuma, sang the song himself, in direct contempt for the judge’s ruling.  Malema was later expelled from the ANC over an unrelated conflict with Zuma.  He formed his own political party, the EFF, which has continued to promote a Marxist, racist agenda, and Malema was elected to Parliament.  Jacob Zuma remains President of South Africa.

Dr. Stanton noted that recent studies of the correlation between corruption and atrocities committed by governments show that the relationship is direct.  Once in power, corrupt governments cling to power because of the enormous wealth their officials amass.  They then persecute, torture, and murder anyone who challenges their grip on power.  That downward spiral has begun in South Africa, just as it did in Zimbabwe.  In Zimbabwe it resulted in the Gukurahunde genocide against Joshua Nkomo’s Matabele people and Mugabe’s repression of the MDC.

The conviction rate has dropped from 32 percent ten years ago to about 22 percent today.  This trend must be reversed.  Police must be given education and training so they become competent and motivated crime fighters.  An honest, educated, and dedicated police force is the strong arm of justice.

Criminal gangs from other African countries should be deported.

The first step is for the South African government to admit that farm murders are a serious threat not just to Afrikaner and white farmers, but to all South Africans, and make stopping these crimes a priority.

The second step is to arrest and convict or impeach corrupt political leaders.

The most important step is for South Africans of all ethnic groups to recognize that we are all members of the same race, the human race.

South Africans must reject the cynical manipulation of racial resentments by politicians like Julius Malema and his Marxist racist followers.

South Africa needs effective security for all of its people.  Without security, democracy is impossible.