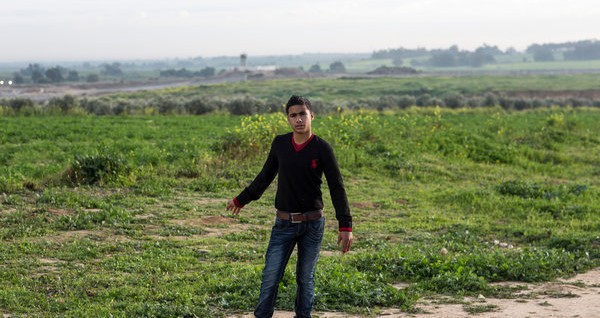 EL BUREIJ, Gaza Strip — It was not much of an escape.

Moments after Ibrahim al-Awawda climbed over the nine-foot fence separating the Bureij refugee camp on Gaza’s eastern edge fromIsrael, he was surrounded by six Israeli soldiers. They arrested him, interrogated him and, after he had spent a month in two Israeli prisons, sent him back to the poverty, death and destruction in Gazathat had led him to flee.

“I knew they would capture me,” said Ibrahim, 15, whose father was killed in an Israeli strike in 2002 and who has since lived through three wars between Israel and Gaza militants, including last summer’s bloody 50-day battle. “The war shook me,” he added. “I told myself I may find a better life. They served me good food, but later, they threw me back to Gaza.”

Ibrahim is one of an increasing number of young Palestinians from Gaza who have been caught trying to cross into Israel in the nearly six months since the latest conflagration subsided. Though he carried nothing with him, others were armed with knives or grenades.

The crossings have shaken residents on Israel’s side of the fence who are still psychologically scarred from the series of tunnel invasions byPalestinian militants that marked last summer’s conflict. But military officials and others see the growing phenomenon as less about terrorism than desperation.

Several fence jumpers, and human rights workers who track their cases, compared their despondency to that of the roughly 300 Gazans who died in a September shipwreck as they were being smuggled across the Mediterranean Sea: They just wanted out, no matter the risk.

Some said they fantasized about finding work in Israel. Even the all-but-inevitable time behind bars is alluring — safe, three meals a day, and the monthly stipend the Palestinian Authority pays all its prisoners.

Compared with Gaza, “the prison in Israel is like a five-star hotel,” said Youssef Abbas, 21, who did stints there after crossing the border in 2010 and 2008. He said he had headed toward the fence twice more in September but had been turned back, once by Gaza security forces and once by a call from his fiancée.

“I was thinking of two choices: death or prison,” Mr. Abbas said. “Because there were so many problems in my life, I was so tired, I had this idea.”

The Israeli military said that 84 Palestinians had been arrested after hopping the fence from September to January, along with nine more in the first nine days of this month. The military would not provide comparable figures for the first half of 2014 or previous years, but it confirmed a recent report in the Israeli daily Haaretz that the prewar monthly average was 13 — less than half the 27 arrested in November.

“It’s a slight increase,” said the Israeli military spokesman, Lt. Col. Peter Lerner, “not necessarily a game-changer, as far as we’re concerned at this stage.” Still, Colonel Lerner said: “Each and every infiltration, we address as a potential terrorist attack. All it takes is for one to come in with a weapon, with a grenade, with a suicide belt and so on. So that’s our concern.”

Separately, the military announced last week that it had destroyed the Israeli side of a tunnel discovered during the summer fight with Hamas, the militant Islamic faction that dominates Gaza.

The military wing of Hamas ran a dozen training camps last month in which 17,000 boys and men ages 15 to 21 learned to climb ropes and fire assault rifles in preparation for the next confrontation with Israel.

For the Israelis living in the tiny communities near the barrier, reports of each illegal crossing are jittery reminders of last summer.

At Kibbutz Sufa, about a mile from where 13 gunmen from Gaza emerged from a tunnel July 17 — an episode that led to Israel’sground invasion of Gaza — “people are reliving the fear,” said Eyal Brandeis, a longtime member of the 300-person kibbutz’s emergency team and a professor of political science at Bar-Ilan University.

Rony Kissin, community manager of Kibbutz Kerem Shalom, just half a football field’s length from the fence, said that residents with permits were carrying their pistols more often than before. Children in the community are acting more violent, she said, and mothers are more worried.

“We can’t see them, because we have not just a fence — we have a wall around three-quarters of the kibbutz, so we don’t really see the border,” said Ms. Kissin, 49. “Sometimes I don’t want to know. If the army catches him seconds after he crosses the border, I don’t think I should know, because it really makes the tension more high.”

In Gaza, men who had crossed said Israeli security officials had questioned them, sometimes for hours, about whether Hamas or any other group had sent them, how they had planned their escape, what they intended to do in Israel and, broadly, what was happening back home in the aftermath of the war. Then, when they returned to Gaza, they said, Hamas security officials questioned them, sometimes for hours, about what they had told the Israelis.

Iyad al-Buzom, the spokesman for Gaza’s Interior Ministry, said it had taken “serious measures to prevent border sneaking” since the war and was considering “more harsh procedures and punishments to stop those who think of crossing the fence.” He said officials worried that crossers would be pressured into collaboration with Israeli intelligence upon their arrest, or that they would be shot as they tried to get to the other side.

Data from the United Nations’ Office for the Coordination of Humanitarian Affairs show that Israeli soldiers killed six Palestinians near the fence in 2014, all but one before the war. That was double the number in 2013, but significantly fewer than the average of 22 annually in the previous four years. Thirty-nine Gaza residents were wounded by Israeli fire and tear gas from September through January, the data show, some while protesting or throwing stones, others while trying to cross.

Ateya al-Nabahin, 15, was shot in the neck as he tried to sneak into Israel in November, and he returned home in January after being treated in two Israeli hospitals. “Now, he is lying on his bed like the dead,” Ateya’s brother, Fadi, said in a recent interview. “He cannot walk or even talk like normal people.”

Looking back, Hasan and Salwa al-Zawara’a see plenty of signs that their 20-year-old son, Noor, was planning to cross before he disappeared Oct. 27 from their home in Johor al-Deek, a village next to the Bureij camp.

Three days earlier, his mother recalled, Noor had asked for a copy of his identity card. That morning, he changed clothes several times before settling on jeans and a black shirt. He had almost never had a decent night’s sleep since the war, his father said, and he had been asking a sister’s husband who had spent six years in Israeli prison what life was like there.

Now he knows. The younger Mr. Zawara’a, who left school after 11th grade and worked occasionally harvesting olives or in construction, calls once a day from the jail in Beersheba where he is awaiting trial Feb. 23 for entering Israel illegally.

“The prison is good, because all of them live in a sense of safety,” said Ms. Zawara’a, who has visited her son twice in jail. “After the war, he got really depressed. He started to feel like there is no life and there is no money, no employment.”

“All the people in this place, in each house, you can find someone who tried to cross,” she added. “When I was traveling in the bus, the Israelis were asking us: ‘What’s wrong? Suddenly, the whole neighborhood is coming to us.’”

Featured Image: Ibrahim al-Awawda, 15, crossed a fence into Israel and was promptly captured and soon returned to Gaza. Many Palestinian youths have been trying to cross to escape the poverty in the territory. Copyright: Wissam Nassar/The New York Times