A Catch-22 in Kenya: Western Terrorism Alerts May Fuel Terrorism 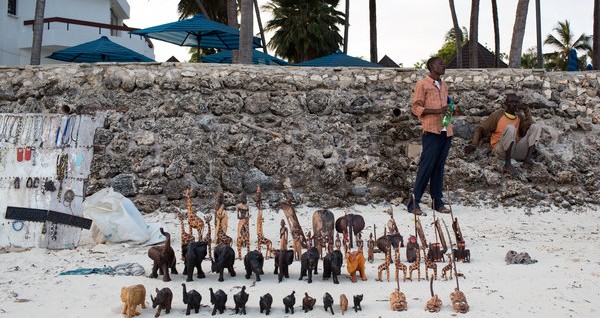 A Catch-22 in Kenya: Western Terrorism Alerts May Fuel Terrorism

MOMBASA, Kenya — Every morning at the Tides Inn, a waiter trudges down from the restaurant to the beach with a huge blackboard advertising the daily specials — deep-fried fish and masala prawns, pepper steak and pizza, all listed in chalk and illustrated with cute drawings.

But nobody ever comes by, not even for a gander.

Up and down the Kenyan coast, it is the same picture. Tables sit empty, dance floors are deserted, crates of Tusker beer collect dust. The fabled white sand beaches along Kenya’s perch on the Indian Ocean have become ghost towns with palm trees.

Kenya’s coastal tourism is collapsing, and part of the reason — a big part of the reason, Kenyan officials say — is Western travel warnings issued after a round of violence last summer in a remote coastal area. TheAmerican warning is perhaps the strictest, barring embassy personnel from setting foot anywhere on the coast, unless special permission is granted. It also warns tourists of possible “suicide operations, bombings — to include car bombings — kidnappings, attacks on civil aviation, and attacks on maritime vessels in or near Kenyan ports.”

Kenyan officials are incensed, saying that the coast is hardly a raging war zone and that the Western travel warnings amount to “economic sabotage,” scaring away travelers who rely on government advisories to explain which places are safe and which are not. Worse, many Kenyans contend, and even some diplomats say, these warnings could become a self-fulfilling prophecy.

The logic goes like this: A major reason for the travel advisories is the string of terrorist attacks that Kenya has suffered over the last three years, including some on the coast. But by contributing to the collapse of the coastal tourism industry, the travel warnings may simply be increasing the joblessness, idleness, poverty, drug use and overall desperation — all well-known kindling for terrorist activity — in an already depressed slice of Kenya.

“The weakening of the coastal economy is aggravating the very problem we were trying to combat,” said one American official in Nairobi who was not authorized to speak publicly.

Within the legions of young men now out of work on Mombasa’s streets, several acknowledged the temptations of militant groups.

“They came to me offering work,” recalled Fahmy Omar Nassir, a former heroin addict in Mombasa. Heroin is becoming another serious problem on the coast, with tens of thousands now addicted.

Mr. Nassir said that a few years ago, a separatist group called the Mombasa Republican Council recruited him to a secret training camp in the bush under the ruse of giving him money for heroin. He stayed a month, but after realizing he was not going to be paid much, he escaped.

“If you give me money, I will follow you,” he said.

He also said that several of his unemployed friends had been lured into the Shabab, a Somali terrorist group that has killed scores in Kenya.

American officials said that they were fully aware of the woes on the coast but that local economic consequences were not part of the travel warning calculus.

“It’s strictly our view of the security and safety situation,” said Philip Skotte, director of the American citizen services office at the State Department.

Still, some American officials in Kenya wonder if their own government has overreacted, with possibly dangerous unintended consequences. Other Western nations — Italy, France, Britain and Sweden, for instance — have formulated more nuanced travel warnings, highlighting certain hot spotswithout drawing a giant red X across Kenya’s entire coast, which is about 300 miles long and home to millions of people.

“Our policy doesn’t make much sense,” said the American official in Nairobi. “There are neighborhoods in Washington, Anacostia, for example, that are way more dangerous than Nyali or Diani,” he said, citing two relatively quiet Kenyan beach towns.

Several aid officials said the travel warnings might be undermining the work the American government had been doing in Mombasa to combat violent extremism, a White House priority.

The American government spent millions of dollars in coastal Kenya in 2013 and 2014 on programs that included facilitating workshops with moderate imams, supporting community peace-building efforts and helping youths get national identification cards — a necessity to land a salaried job in Kenya but something many young men on the coast lacked because of a history of marginalization. Many of those programs have since stopped.

Experts argue that youth unemployment is a primary driver for radicalization. And in normal times, the Kenyan coast has an answer for this: an impressive job-creating machine — the tourism industry — that cranks out opportunities for thousands of young people, from hotel clerks to maids, chefs, drivers, mechanics and computer engineers.

But the perception that the coast is off limits has left that job machine sputtering, with many hotels at 5 to 15 percent occupancy and more than 20,000 people laid off.

“We have no desire to do any economic damage to Kenya,” said Robert F. Godec, the American ambassador to Kenya, adding that he questioned the impact of the travel warnings. Other factors, he said, including news media coverage of the recent terrorist attacks, had contributed to the coast’s slump.

While Kenya has long had a spotty record on public safety, with a corrupt police force and rampant street crime, it does not seem that the beach towns are any more perilous than the capital, Nairobi, where there are no travel restrictions on American Embassy personnel, except to a Somali neighborhood few expatriates ever visit anyway.

Kenya’s two worst terrorist attacks — the bombing of the American Embassy in 1998 and the siege of the Westgate mall in 2013 — both happened in Nairobi. The capital is also considered the most dangerous part of the country for muggings, carjackings and gangland-style killings, like the recent ambush of a prominent lawmaker who was shot and killed by masked men in the heart of downtown.

But many observers say all the factors are lining up for the ailing coast to become more volatile. Already there has been a spike in break-ins and holdups, along with some brazen attacks, like a machete raid on a military barracks. And the coast, which is predominantly Muslim, has been historically neglected, often viewed by other Kenyans with suspicion and disdain.

Since independence, Kenya’s central government has been controlled by “wabara,” the upcountry people, who have also appropriated some of the best coastal land. Even today, many coastal tourism operators say the Kenyan government seems deaf to their plight, perhaps overconfident that recent oil discoveries in Kenya’s north would be the magic bullet for the country’s economy. Now that global oil prices have crashed, that strategy seems flawed.

Out on the beach, it is not uncommon to see a pack of 10 to 15 aging beach boys padding after a single tourist, offering boat rides, camel rides, fresh fish, the desperation shining in their eyes.

John Kazungu, a “beach operator,” has been doing this for years. He built a house from the crumpled bills pressed into his hands by mzungus, or foreigners.

On a recent afternoon, Mr. Kazungu zeroed in on a heavyset mzungu strolling down the beach who shook his head at Mr. Kazungu’s offers and then whirled around violently, jerking both his hands up, palms out, as if to say “Stop it!”

He then disappeared down a soft, white, deserted strip of sand that almost anywhere else would have qualified as paradise.

Featured image: Souvenir vendors with their merchandise this month on Bamburi beach near Mombasa, Kenya, hoping for sales to tourists. Copyright: The New York Times