In Worcester v. Georgia, 31 U.S. 515 (1832), Chief Justice John Marshall recognized that title to lands in possession of Native peoples can pass to non-Native peoples only through the cession of those lands by the Indian Tribes to the United States and, thence, under the laws of the United States to those residing in a state or territory. “The treaties and laws of the United States contemplate the Indian territory as completely separated from that of the states, and provide that all intercourse with them shall be carried on exclusively by the government of the union.” Id. at 557.

As depicted in the following illustration, Native peoples were in possession of all lands from the Atlantic Coast to the Pacific Coast of what subsequently became the continental United States. 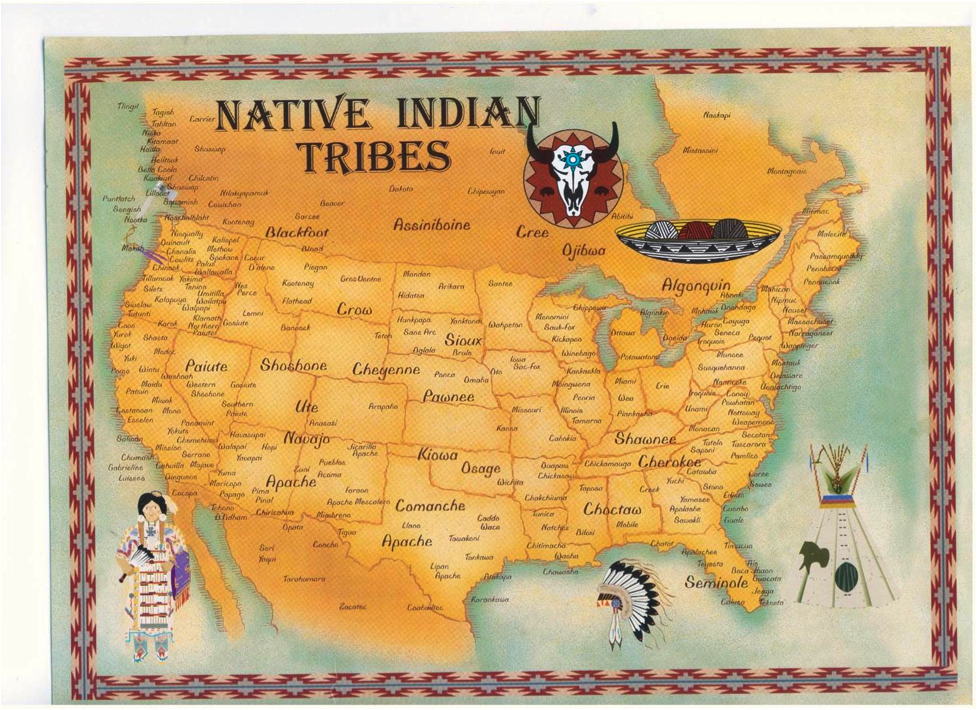 The land that now comprises the State of Colorado came into the United States through the 1803 Louisiana Purchase with France and the 1848 Treaty of Guadalupe Hidalgo with Mexico. The 1845 Fremont map plainly shows that the Arapaho and Cheyenne possessed the eastern half of what is now Colorado. 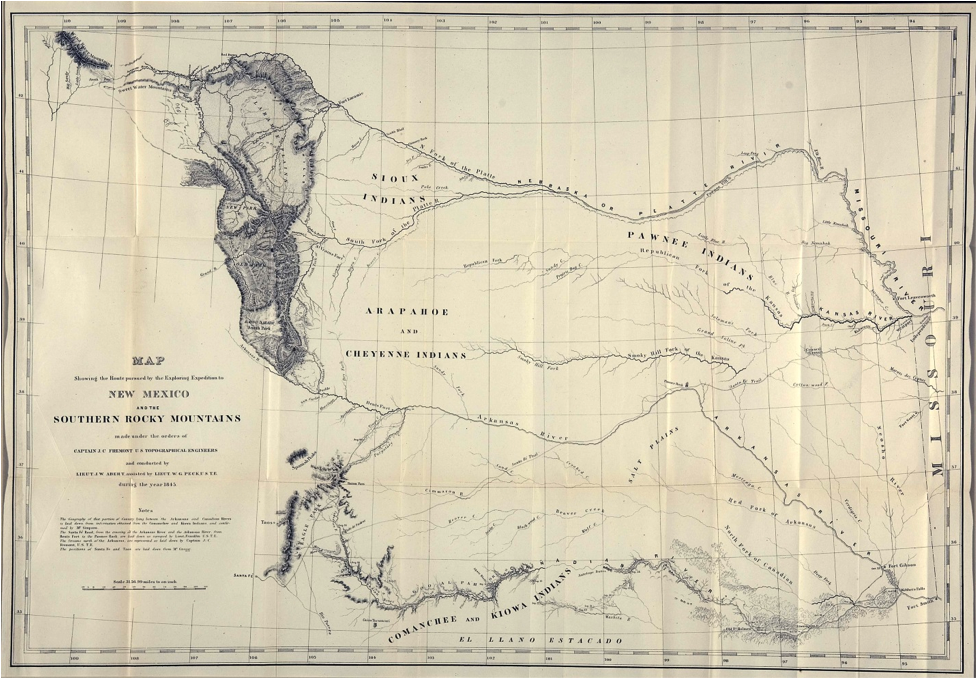 As of 1845, all lands south of the Arkansas River through the San Luis Valley and west of the Continental Divide to California were claimed by Mexico, as shown by this map of Mexico predating the 1848 Treaty of Guadalupe Hidalgo. 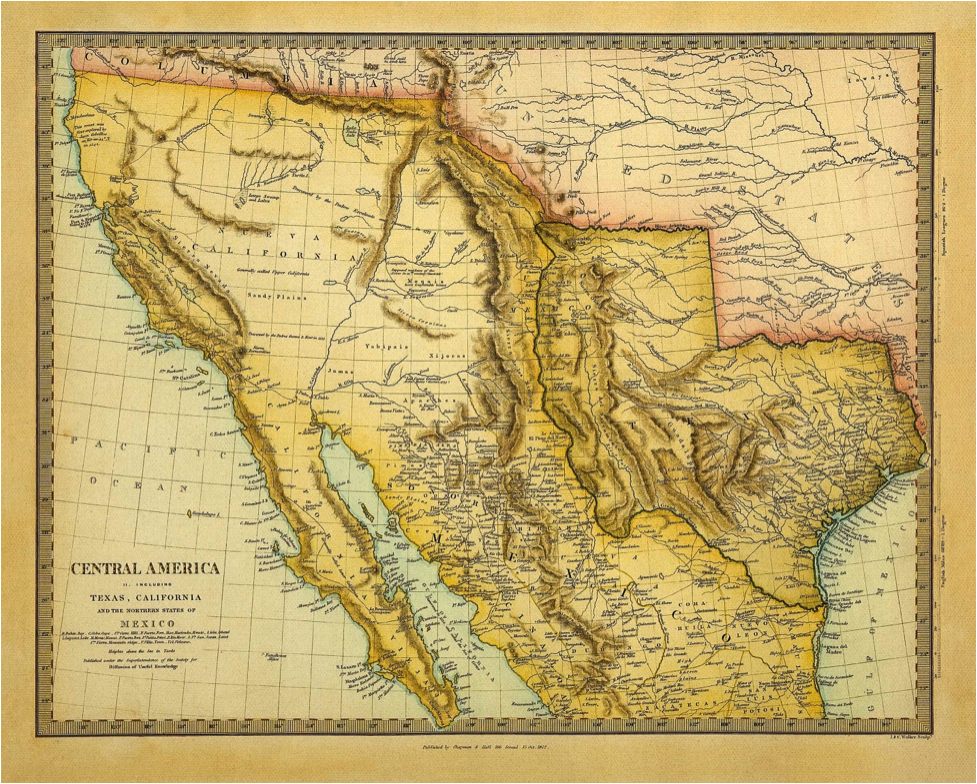 As shown by the 1902 Land Office Map of Colorado, Colorado Territory came into being in February of 1861 at the outset of the Civil War. The Union Congress carved it out of the Territories of Nebraska, Kansas, Oklahoma, New Mexico and Utah to take into one territory the whole of the Continental Divide’s mineral bearing area running through the heart of the Rocky Mountains from Wyoming to New Mexico. 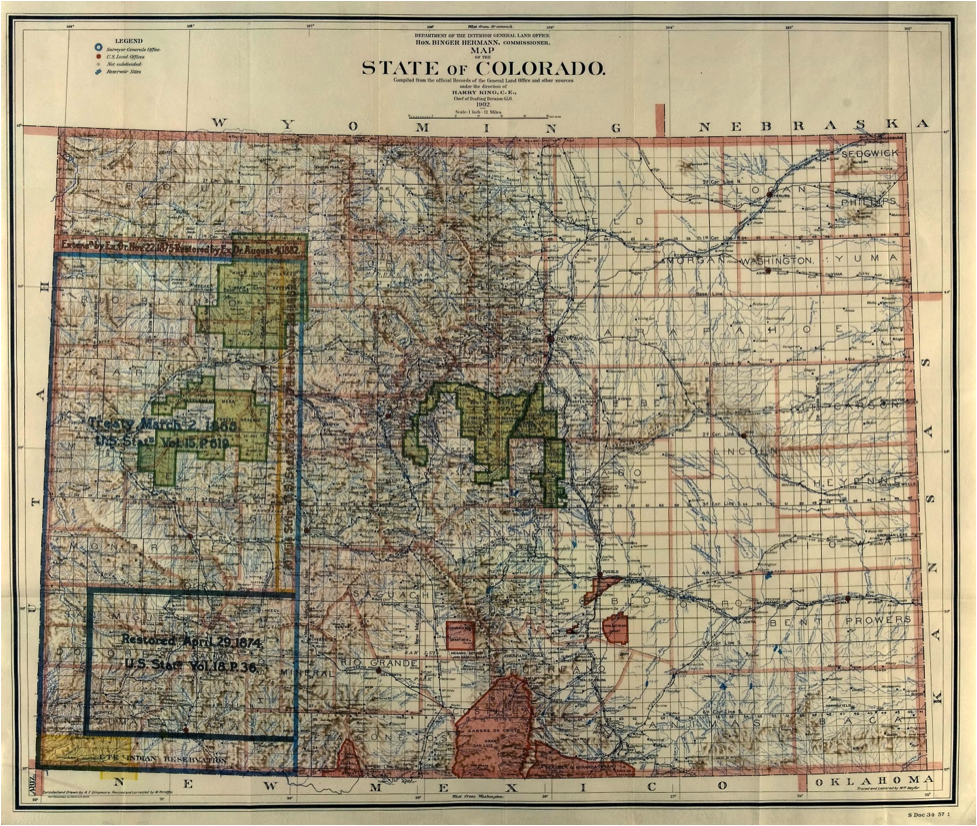 The 1864 Sand Creek Massacre was the pivotal event in the ultimate removal of the Arapaho and Cheyenne peoples from eastern Colorado. The 1851 Fort Laramie Treaty had guaranteed possession of the lands from the North Platte River in the Territory of Wyoming to the Territory of New Mexico south of the Arkansas River, as shown in this depiction. 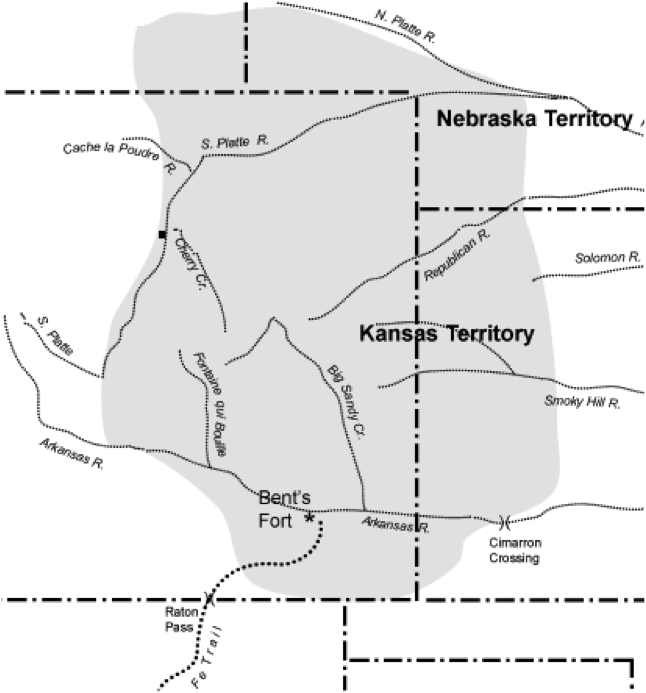 Following the 1858 discovery of gold in western Kansas Territory, non-Natives rushed onto the Arapaho and Cheyenne lands comprising the High Plains and the eastern slope of what became Colorado Territory. Just prior to the creation of Colorado Territory, the United States also in February of 1861 had negotiated the Treaty of Fort Wise with some of the Arapaho and Cheyenne chiefs. This treaty shrunk the Cheyenne and Arapho lands to a reservation in southeastern Colorado. The 1862 Homestead Act passed by the Union Congress made possible the conveyance of ceded Indian land to non-Native persons. 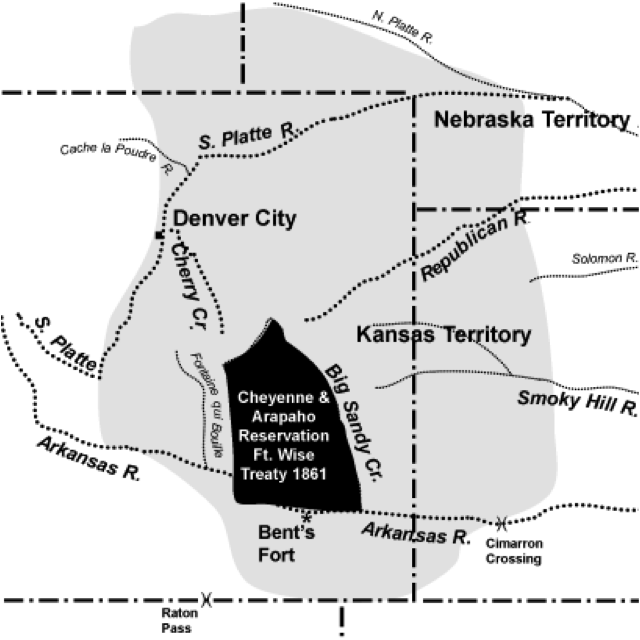 A peaceful village led by Left Hand of the Arapaho and Black Kettle of the Cheyenne, along with other peace chiefs of both tribes, encamped at the reservation under the direction of Colorado’s Territorial Governor, John Evans, who also served as Superintendent of Indian Affairs for the territory. On November 29, 1864, Colorado Cavalry volunteers serving 100 day enlistments in the United States Army under the command of Colonel John Chivington of Colorado Territory ravaged these people.

“On November 29, 1864, approximately 675 United States soldiers killed more than 200 Cheyenne and Arapaho villagers who were living peacefully near Fort Lyon, Colorado, a place where American negotiators had assured they would be safe. Cheyenne Chief Black Kettle’s village had raised a U.S. flag as symbols of peace, but Colonel John Chivington ignored the banners and ordered his troops to take no prisoners. Ambushed and outnumbered, the Cheyenne and Arapaho villagers fled on foot to the bottom of the dry stream bed. After eight hours, the shooting finally stopped and the village was pillaged and set ablaze. Most of the dead were women, children, and elderly men. The few survivors sought safety in neighboring camps, but the descendants’ lives were forever changed. The Sand Creek Massacre deeply impacts the sovereign tribal nations whose ancestors were massacred that tragic day, and preventing atrocities such as this in the future is imperative.”

Likewise, the Colorado General Assembly’s 2014 resolution unanimously recognized the Sand Creek Massacre as an unjust killing of peacefully assembled Arapaho and Cheyenne which reverberates today upon their descendants:

of the State of Colorado, the House of Representatives concurring herein: That we, the members of the General Assembly, acknowledge the devastation caused by the Sand Creek Massacre and seek to raise public awareness about the tragic event, the Cheyenne and Arapaho people, and events surrounding it.

The University of Denver’s report on the role of its founder, John Evans, assigns culpability for the Sand Creek Massacre to Territorial Governor Evans, who also held the office of Superintendent of Indian Affairs for Colorado Territory:

“While not of the same character, Evans’s culpability is comparable in degree to that of Colonel John Chivington, the military commander who personally planned and carried out the massacre. Evans’s actions and influence, more than those of any other political official in Colorado Territory, created the conditions in which the massacre was highly likely.”

The Sand Creek Massacre provoked a general uprising by the plains tribes resulted in the removal of the Cheyenne and Arapaho from Colorado Territory under the 1865 Little Arkansas Treaty and the 1867 Medicine Bow Treaty. The 1865 treaty contains an explicit admission that the Arapaho and Cheyenne massacred at Sand Creek were at peace while under the protection of the U.S. flag.

“The United States being desirous to express its condemnation of, and, as far as may be, repudiate the gross and wanton out-rages perpetrated against certain bands of Cheyenne and Arrapahoe Indians, on the twenty-ninth day of November, A. D. 1864, at Sand Creek, in Colorado Territory, while the said Indians were at peace with the United States, and under its flag, whose protection they had by lawful authority been promised and induced to seek, and the Government being desirous to make some suitable reparation for the injuries then done . . .”

In the scant fourteen years from 1851 and 1865, the Arapaho and Cheyenne were deprived of their homelands depicted in this composite sketch of treaty lands lying between the North Platte River and the Arkansas River, which were then opened up to homesteading. Eventually homestead entries in Colorado as a whole totaled 107,618 and covered 22,146,400 acres of land. Only Montana and North Dakota experienced more entries. Carl Ubbelohde, et. al., A Colorado History 259 (1972). 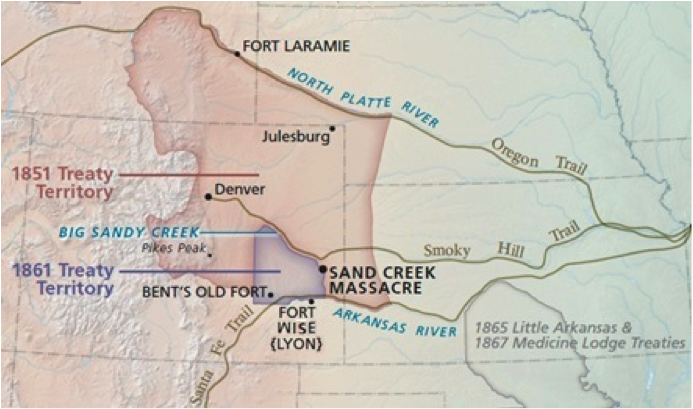