Ukraine faced a crisis. Nigeria passed a test. And the Islamic State and Ebola left indelible marks. How 2014’s success stories and struggles affected state– and global– stability last year and set the stage for 2015.

INDEX BY THE FUND FOR PEACE

In today’s interconnected world, crises are rarely confined by borders. Over the course of a year, the strength and vitality of a country can be shaken, sometimes to its bedrock, by the tumult of its neighbors, and 2014 was no exception. Russia’s aggression affected Ukraine — but it also reverberated across the rest of Europe. The Ebola crisis was centered in West Africa, but tested the responses of governments around the world. And spiraling conflicts in Iraq and Syria cut deeper cracks of instability throughout the broader Middle East.

For 11 years now, the Fragile States Index, created by the Fund for Peace and published by Foreign Policy, has taken stock of the year’s events, using 12 social, economic, and political indicators to analyze how wars, peace accords, environmental calamities, and political movements have pushed countries towards stability or closer to the brink of collapse. The index then ranks the countries accordingly, from most fragile to least.

Some of 2014’s findings aren’t at all surprising: Indeed, Ukraine, Syria, and Libya were among the countries to worsen most dramatically in the index’s rankings this year, as fighting tore through their cities and villages. Russia’s economy stumbled under the weight of heavy sanctions, causing it to rise 20 slots in the overall rankings. And Mali, facing a rebel insurgency and an outbreak of Ebola, saw the fifth-biggest overall increase in its score.

But there are some bright spots. Three countries — Cuba, Georgia, and Portugal — all improved their scores by 3.4 points, the largest margin in 2015. After normalizing relations with the United States, Cuba shifted five spots in the rankings, moving from 107 to 112. Georgia’s encouraging economic prospects bumped its overall ranking from 63 to 70. Portugal exited the international bailout program it had requested in 2010, regaining economic sovereignty, and aiding its standing on the index. Finally, Nigeria, despite a growing and violent insurgency in its northeast and shrinking oil revenues, appears to have weathered a handful of obstacles with surprising resilience.

From revolutions to epidemics, from elections to leaps forward for human rights, here’s what 2014 looked like for the countries of the world.

For Ukraine, the year 2014 began with large-scale protests that would topple a corrupt government, and ended with the eastern part of the country in the throes of a civil war that has killed more than 6,000 people and displaced 1 million. Ukraine has the unfortunate distinction of being the country whose score worsened most in 2014.

The country’s Group Grievance score — that is, the metric that measures whether there are communities that feel unfairly treated or singled out for repression — jumped more than half a point this year. While there have long been tensions between the minority Russian-speaking population, located mainly in the east, and the majority Ukrainian-speaking population, events in 2014, including the Russian annexation of Crimea, ostensibly to protect the peninsula’s ethnic Russians, brought these tensions to new heights. Ethnicity and language remain factors in the conflict in the country’s eastern Donbass region, where separatists in the provinces of Donetsk and Luhansk have declared themselves independent “republics” and formed close ties with Russia.

The war has also severely impacted Ukraine’s economy. Most of the mines and factories in the country’s East have shut down due to fighting. Annual inflation has climbed as high as 60 percent in the early months of 2015, and the country is now dependent on International Monetary Fund (IMF) loans to pay its bills. The IMF predicts the economy will shrink by 9 percent in 2015.

Ukraine’s stability has been shaken in more subtle ways by the fighting. One of the Fragile State Index’s indicators examines evenness of development. Ukraine’s more European-leaning West has historically been the more economically developed part of the country. This lopsidedness has only become more pronounced over the course of the past year, as western Ukraine has taken steps to integrate further with Europe, while industry in the country’s East has all but collapsed as a result of the conflict.

FLASHBACK: FROM MAIDAN SQUARE TO DONETSK AND BACK AGAIN 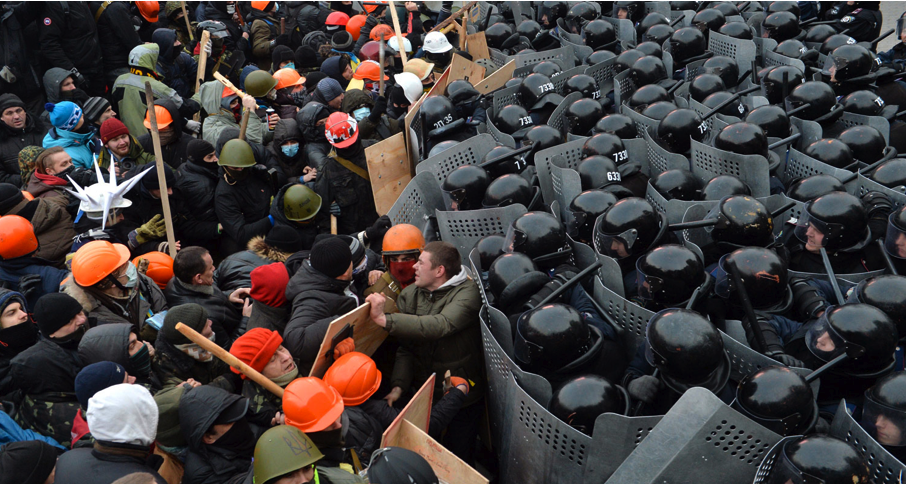 Protesters clash with riot police on Jan. 19, 2014 during an opposition rally in the center of Kiev. Ukrainian police used tear gas, stun grenades, and water cannon in a bid to disperse 200,000 protesters who sought to storm police cordons near the parliament building.

NIGERIA: A COUNTRY IS TESTED — BUT PEACE PREVAILS

2014 was not without its challenges for Nigeria as the Boko Haram insurgency in the country’s Northeast continued to escalate. The group killed about 2,000 people during the first six months of 2014 — almost as manyas during the previous four years combined — and sparked global outrage with its April kidnapping of more than 250 Chibok schoolgirls. Low oil prices put pressure on budgets for a government that relies on oil exports for about 70 percent of its income. The country’s elites grew increasingly factionalized, as it became clear that the opposition All Progressives Congress party posed a real threat to President Goodluck Jonathan’s hold on power. Overall, the country’s score jumped from 99.7 the year before to 102.5, pushing Nigeria into the “High Alert” category. And yet, when it came time to face a crucial test — this April’s elections, and the threat of post-election violence — remarkably, Nigeria passed with flying colors.

In the buildup to the vote, many had expected the largely Muslim North to revolt had Jonathan won another term, and for violence to flare in the Christian South had challenger Muhammadu Buhari emerged victorious. But the country’s leaders, recognizing the potential for bloodshed, took steps to lower tensions before they boiled over: they held forums across the country on the dangers of election violence; Jonathan and Buhari signed a pact promising to respect the outcome, and when it became clear he was going to lose, Jonathan called his challenger to congratulate him — a political move that observers called “unprecedented.”

That Nigeria was able to navigate its election through to a safe and successful outcome reveals the limited predictive power of even time-tested markers of state fragility. With the odds seemingly against them, Nigeria’s leadership exercised restraint, and Nigerian civil society put in place the tools and mechanisms to help calm election violence before it started.

The United States, of course, is not a fragile state. With its score of 35.4 it remains well within the “highly stable” range. But a closer look at the score reveals that a tumultuous 2014 — one that included the deaths of Eric Garner in New York, Michael Brown in Ferguson, Missouri, and 12-year-old Tamir Rice in Cleveland — has taken its toll: The United States’ Group Grievance score, which has increased every year since 2007, went up again this year, due in part to the protests sparked by the police-related deaths of African Americans. Though the economy has continued to strengthen, the United States’ score for the Factionalization of Elites, too, remained at the highest it has ever been, a peak that it reached as a result of 2013’s government shutdown and from which it has yet to retreat.

SYRIA AND IRAQ: IN THE SHADOW OF THE CALIPHATE

In both Syria and Iraq, things in 2014 went from bad to worse. Reeling from four years of civil war, the 7.6 million people displaced but still trapped in Syria’s conflict have suffered at the hands of Bashar al-Assad’s regime and from an ever fracturing opposition, now dominated by Islamist forces and the Islamic State, which has also sundered Iraq. As a result, the war in Syria has led to the index’s largest overall change in Demographic Pressures, with the country’s score rising from 6.0 to 8.1 in that indicator, and the fourth-worst ranking for State Legitimacy as the Assad regime struggles to retain power. Both Iraq and Syria register among the highest Group Grievance scores in the world.

Among all the crises of 2014, none captured the attention of the world with the same fear and fascination as the Ebola outbreak that swept through Guinea, Liberia, and Sierra Leone, killing more than 8,000 people and infecting some 20,000 over the course of the year. The response to the virus in all three countries added to demographic pressures, tested public services, and demanded external interventions to grapple with logistics of the response. Moreover, the fallout exacerbated economic pressures, as movement was confined and severe restrictions were placed upon the populations to stanch the outbreak’s spread. Guinea’s overall ranking moved from 12 to 10, while Liberia’s ranking shifted from 24 to 21, and Sierra Leone went from being ranked 35 to 31.

PART 3: IS THE ISLAMIC STATE A FRAGILE STATE?

If Ferguson, Missouri, were a country, would it be a fragile state? What about the Islamic State? We asked the Fund for Peace to apply its CAST framework and methodology (the same set of indicators it uses for the index) to a pair of non-state entities. Scoring a country is very different from scoring a city, or a self-proclaimed caliphate, the Fund has warned. But with the caveat that we are, to a certain extent, comparing apples to oranges, here’s what they found.

The increase in the United States’ 2014 Group Grievance score — the indicator that tells us whether sub-communities within a country feel particularly frustrated or singled out — was, in part, the result of the August events that took place in the small town of Ferguson, Missouri, where Michael Brown, an unarmed black teenager, was fatally shot by a white police officer. Brown’s death inspired outrage, and over more than two weeks, protests drew national attention and spilled into riots that attracted massive crowds, overwhelming local authorities. The protests were eventually quelled with the help of the U.S. National Guard, but the size and militarized atmosphere reminded some of images from uprisings in some of the more repressive countries that typically top the FSI.

Ferguson scored a 62.6 on the Fragile States Index, putting the town of 21,000 among the ranks of countries like Botswana, Brunei, and Brazil in the “warning” category. (And worse off than Detroit two years ago, for what it’s worth.) Major contributors to Ferguson’s score? It fared poorly in External Intervention — the result of a National Guard presence on the streets. Its score on State Legitimacy (or in this case, government legitimacy) was also high — a sign that many in town have lost faith in the city council. And poor race relations — both prior to the Michael Brown shooting and after — contributed to a high Group Grievance score.

Has the caliphate managed, in the 12 months since it proclaimed its existence to the world, to construct a stable state? The Islamic State might claim to have a functioning bureaucracy, but it’s far from having any semblance of sustainable governance or infrastructure. Were it a recognized country, the Islamic State would rank just below South Sudan and Somalia as the third-most fragile state on the index, with a score of 112.3. The areas under the control of the Islamic State suffer from many of the same issues that hurt the scores of Iraq (104.4) and Syria (107.9): Its grade in the indicators of Refugee Pressures, Public Services, Group Grievances, and External Intervention, among others, all maxed out the Fund’s metrics — scoring 10 out of 10 on each. (The overall scores for Iraq and Syria also factor in Islamic State-controlled areas.)

The areas under caliphate control face extra economic pressures and uneven development: In the Islamic State, a small group of what the Fund calls “a highly sectarian elite” retains control of oil revenue and taxation, while the rest of the territory’s economy is in freefall.

The full results of Fund For Peace 2015 Fragile State Index can be found here.