ISIS Transforming Into Functioning State With the Use of Terror 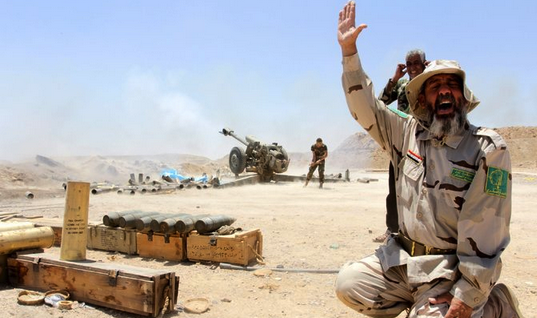 ISIS Transforming Into Functioning State That Uses Terror as Tool

But its officials are apparently resistant to bribes, and in that way, at least, it has outdone the corrupt Syrian and Iraqi governments it routed, residents and experts say.

“You can travel from Raqqa to Mosul and no one will dare to stop you even if you carry $1 million,” said Bilal, who lives in Raqqa, the Islamic State’s de facto capital in Syria, and insisted out of fear on being identified only by his first name. “No one would dare to take even one dollar.”

The Islamic State, also known as ISIS, ISIL and Daesh, initially functioned solely as a terrorist organization, if one more coldblooded even than Al Qaeda. Then it went on to seize land. But increasingly, as it holds that territory and builds capacity to govern, the group is transforming into a functioning state that uses extreme violence — terror — as a tool. That distinction is proving to be more than a matter of perspective for those who live under the Islamic State, which has provided relative stability in a region troubled by war and chaos while filling a vacuum left by failing and corrupt governments that also employed violence — arrest, torture and detention.

While no one is predicting that the Islamic State will become steward of an accountable, functioning state anytime soon, the group is putting in place the kinds of measures associated with governance: issuing identification cards for residents, promulgating fishing guidelines to preserve stocks, requiring that cars carry tool kits for emergencies.

That transition may demand that the West rethink its military-first approach to combating the group.

“I think that there is no question that the way to look at it is as a revolutionary state-building organization,” said Stephen M. Walt, a professor of international affairs at the John F. Kennedy School of Government at Harvard. He is one of a small but growing group of experts who are challenging the conventional wisdom about the Islamic State: that its evil ensures its eventual destruction.

In a recent essay in Foreign Policy magazine — “What Should We Do If the Islamic State Wins?” — Mr. Walt argued that the Islamic State could indeed prevail in the face of a modest, American-led military campaign that has been going on for almost a year and still leaves the group in control of large areas of Syria and Iraq, including Mosul, its second-largest city.

He wrote, “An Islamic State victory would mean that the group retained power in the areas it now controls and successfully defied outside efforts to ‘degrade and destroy’ it.”

He added that now, after almost a year of American airstrikes on the group, it is becoming clear that “only a large-scale foreign intervention is likely to roll back and ultimately eliminate the Islamic State.”

Mr. Walt is not the only expert thinking along these lines. It is an argument buttressed by a widespread belief that a military strategy alone, without political reconciliation to offer alienated Sunnis an alternative authority, is not sufficient to defeat the Islamic State.

This is mostly because many Sunnis in both countries who live under the group see no viable alternative, especially not in a return to rule by the governments of Syria and Iraq. Sunnis in Iraq remain broadly hostile to the Shiite-controlled central government. As for Syria, President Bashar al-Assad has presided over a civil war that has killed more than 200,000 people and basically dislocated half the population.

“Honestly, both are dirty, the regime and Daesh,” said Ahmed, the owner of an antiques shop who recently fled to Raqqa to avoid airstrikes in outlying areas. But the Islamic State, he said, “is more acceptable here in Raqqa.”

Ahmed, who gave only his first name for fear of reprisals, has also lived under rule by the Free Syrian Army, or F.S.A., the rebel group that rose up in 2011 to fight the Syrian government. The F.S.A., he said, is “like the regime. They are thieves.”

Under the Islamic State, he said, life can be brutal, but at least it seems more stable for those who can avoid crossing the group’s leaders. “Here they are implementing God’s regulations,” he said. “The killer is killed. The adulterer is stoned. The thief’s hands are cut.”

A similar sentiment helped the Taliban consolidate power two decades ago in Afghanistan: While the Taliban were feared, and their justice was often brutal, they were also respected by many Afghans for standing against corruption and chaos — and they remained firmly in control until the American invasion in 2001.

John E. McLaughlin, who was deputy director of the C.I.A. from 2000 to 2004, said he was recently at a dinner party in Washington at the home of an Australian diplomat when the discussion turned to the threat of the Islamic State.

“It suddenly just occurred to me, if you add everything up, that these guys could win,” he said. It is a controversial notion, he explained, because the group’s graphic brutality, which it showcases to the world in gory videos released through social media, has fed a sense that its demise is inevitable because it is so evil.

Drawing on parallels from history, experts say, the group’s violence can be seen in a different light. Mr. Walt mentioned the guillotine of the French Revolution, and the atrocities of the Bolshevik Revolution in Russia and the Communist one in China — imperfect analogies, to be sure, but ones that underscored the violence and oppression that can precede creation of a revolutionary state.

“At the time, these movements were regarded as completely beyond the pale and a threat to international order,” he said.

Mr. McLaughlin pointed to Hezbollah, the Lebanese militant organization seen as a terrorist group in the eyes of the West and now a legitimate political player, and also reached back centuries to the brutality of English royalty.

“If you look at what the English kings did to consolidate their territories in the 14th and 15th centuries,” he said, “they were not only beheading people but disemboweling them.”

William McCants, the director of the Project on U.S. Relations With the Islamic World at the Brookings Institution in Washington, and an expert on the evolution of the Islamic State, said the historical analogies were accurate.

“We in the West have bought into this idea that insurgency and counterinsurgency is a battle for hearts and minds,” he said. “We forget how many states have been established through brutality.”

Mr. McCants said this was an underlying theme in his coming book, “The ISIS Apocalypse,” to be published in September. “You’d like to say that treating people well and good governance go hand in hand,” he said, “but it’s not the case.”

Inside Islamic State territory, the group’s violence is regarded differently than it is in the West. In the communities it controls, citizens have already grown inured to violence. In Iraq, citizens have lived with war for more than a decade, including the days of sectarian civil war when a signature act of some Shiite militias was to drill the heads of Sunnis. And before that, they lived under the police state thuggery and corruption of Saddam Hussein’s Baath Party.

Now there is a limited sense of order, and cleaner streets, a low bar, perhaps, but a reality amid years of war and anarchy. Hassan Hassan, an analyst who has studied the Islamic State and is a co-author of a book on the group, said that on the ground there was a “logic of savagery.” If people avoid any sign of dissent, he said, they can largely go about their lives.

He added, “They feel like there is a functioning state.”

A recent study in Foreign Affairs focused on the group’s evolving legal system, based on an austere interpretation of Islamic law and modeled on a system set down by the Prophet Muhammad in the seventh century. Andrew F. March, a professor of political science at Yale, and Mara Revkin, a graduate student there,wrote in the study that over time the Islamic State “could become an increasingly ‘normal’ state, in which the simplicity of rules and institutions plucked out of early Islamic history gives way to bureaucratic administration and positive law.”

Hassan Abu Hanieh, a Jordanian authority on jihadist groups, said: “The judiciary system is swift and effective. That is why locals find stability in ISIS, and wrongdoings such as bribes and corruption are barely heard of.”

Mr. McLaughlin, the onetime C.I.A. deputy, wondered whether the group, as it evolves, would begin to change its behavior, halting the destruction of antiquities, as it did in the recently captured Syrian city of Palmyra, or moderating its brutality as other revolutionary movements in history have done. “If they did,” he said, “the sense could settle in that this could be the new reality.”

Still, he said, it is hard to imagine the Islamic State becoming a legitimate state, with functioning airports and passports.

But, he added, “it’s not inconceivable.”