Persecuted by Islamic State, Yazidis turn to ICC for Justice 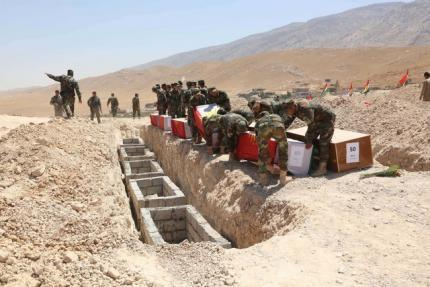 Persecuted by Islamic State, Yazidis turn to ICC for Justice

Image: Kurdish peshmerga forces carry coffins, draped with Kurdish flags, containing the remains of Yazidis who were killed by militants of the Islamic State, during a burial ceremony at Mazar Sharaf al-Din, north of Sinjar Mountain, August 13, 2015. REUTERS/ARI JALAL

Advocates for the Yazidi people of northern Iraq, who have been targeted by Islamic State because they are not Muslims, urged the International Criminal Court on Thursday to investigate their persecution as a potential case of genocide.

In a meeting with ICC Prosecutor Fatou Bensouda, two Yazidi groups submitted a report detailing atrocities they allege IS fighters in northern Iraq have perpetrated since August 2014.

They include the summary executions of more than 700 Yazidi men, the killing of the sick and elderly, the rape and enslavement of thousands of women and the abduction of their children, who are forced to convert to Islam and fight for IS.

More than 400,000 Yazidi have fled Iraq’s Sinjar and Nineveh Plains districts, at times with the help of U.S. and Iraqi strikes against IS forces. They are now living in camps in areas controlled by the Kurdish Regional Government of Iraq.

Islamic State has openly said it wants to eliminate the Yazidi religion, which it regards as heathen. Yazidi believe in one god and their theology mostly derives from ancient Iranian religious traditions, rather than canonical Jewish, Christian, or Islamic texts.

A spokeswoman for Bensouda confirmed she has received the report but could not comment further.

The court’s previous prosecutor Luis Moreno Ocampo, who helped put together the Yazidi submission, told Reuters in an interview this month he believed the treatment of the Yazidi was a clear case of genocide.

Bensouda has previously acknowledged that Islamic State fighters appeared to be committing grave crimes in Iraq and Syria. She has called on the international community to act as she has no jurisdiction because Iraq and Syria are not ICC members.

The report submitted by the Free Yezidi Foundation and Yazda, with the support of the Kurdish Regional Government of Iraq, argues the court has jurisdiction over some 5,000-7,500 foreign fighters within IS who come from ICC member states, including around 2,000 from France, Britain, Belgium, Germany and the Netherlands.

The ICC was set up in 2002 to prosecute war crimes and crimes against humanity when member states are unwilling or unable to do so themselves. Bensouda said in April the court could in theory exercise “personal jurisdiction” over individuals from member states who have joined IS.

The Yazidi groups said Thursday they had evidence that foreigners played an important role within IS.

“They are a significant portion of Islamic State,” Murad Ismael of Yazda told Reuters in The Hague.

The groups want Bensouda to review publicly available evidence and legal arguments to see whether her office has jurisdiction and can open a formal investigation.

The U.N. Security Council could also refer the case to the ICC regardless off whether a state is a member of the court, as it did over genocide allegations in the Darfur region of Sudan.