Image: The Rohingya, Muslims in a Buddhist land, are reviled by the majority. They have lived in Myanmar for generations but are denied many basic rights. CreditTomas Munita for The New York Times

BANGKOK — Myanmar recognizes 135 ethnic groups within its borders. But the people who constitute No. 136? They are the people-who-must-not-be-named.

Daw Aung San Suu Kyi, the leader of Myanmar’s first democratically elected government since 1962, embraced that view last week when she advised the United States ambassador against using the term “Rohingya” to describe the persecuted Muslim population that has lived in Myanmar for generations.

Her government, like the previous military-led one, will not call the Rohingya people by that name because it does not recognize them as citizens, said her spokesman, U Kyaw Zay Ya, a Foreign Ministry official.

“We won’t use the term Rohingya because Rohingya are not recognized as among the 135 official ethnic groups,” said Mr. Kyaw Zay Ya, who was at the meeting. “Our position is that using the controversial term does not support the national reconciliation process and solving problems.”

The stance does not bode well for the Rohingya or for rights activists who had hoped Ms. Aung San Suu Kyi, a Nobel Peace Prize laureate, would reverse discriminatory policies that have marginalized the Rohingya and prompted many to flee. 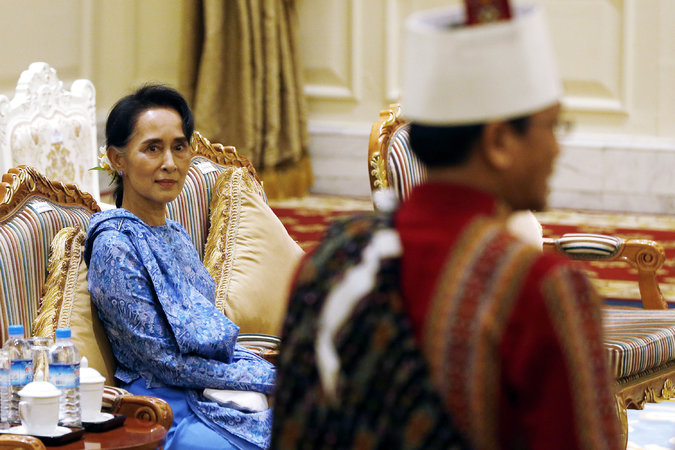 Aung San Suu Kyi in Naypyidaw, Myanmar, in March. The issue of what to call the Rohingya has taken on great significance as her party establishes the country’s first nonmilitary government in decades.CreditPool photo by Nyein Chan Naing

“She is not saying anything about the Rohingya people in Myanmar and their rights to religion and education and health care,” said U Aung Win, a Rohingya community leader in Rakhine State. “As a Nobel Peace Prize winner, why is she so silent?”

The United States Embassy confirmed that the newly arrived ambassador, Scot A. Marciel, had met with Ms. Aung San Suu Kyi but would not comment on their discussions.

Ms. Aung San Suu Kyi’s position on the name has taken on great significance as her party, the National League for Democracy, or N.L.D., establishes the country’s first nonmilitary government in decades. Barred by the military-drafted Constitution from serving as president, Ms. Aung San Suu Kyi holds the posts of state counselor and foreign minister, among others, but she is the country’s de facto leader. The new government took over in March.

The Rohingya in Myanmar, Muslims in a primarily Buddhist land, are denied basic rights, including citizenship, freedom of worship, education, marriage and freedom of travel. More than 100,000 who were driven from their homes by violence in 2012 are in resettlement camps. Many fled on dangerous sea voyages.

Many nationalist Buddhists reject the name Rohingya and call them Bengalis, implying that they are interlopers from Bangladesh, a position also taken by the former military government.

The United States Embassy recently drew criticism for using the word Rohingya in a statement expressing condolences for the deaths of at least 20 people whose boat capsized on April 19 off the coast of Rakhine.

Nationalist Buddhists challenged the new Myanmar government to protest the Americans’ use of the word and staged a demonstration outside the United States Embassy in Yangon.

At an April 28 news conference, Mr. Marciel responded by saying that it was standard practice around the world to let communities decide for themselves what to be called. “And normally, when that happens, we would call them what they want to be called,” he said. “It’s not a political decision; it’s just a normal practice.”

Ms. Aung San Suu Kyi’s decision to raise the issue with Mr. Marciel the next day was an apparent concession to the extremists and was welcomed by the nationalist Association for the Protection of Race and Religion, also known as Ma Ba Tha.

“We don’t want that word because they are not our nationality,” said U Thaw Bar Ka, a leader of the group. “And now I read the news that the Foreign Ministry agrees with us. It’s really good. At first, I thought the new government would be useless on this issue.”

Rights advocates expressed disappointment that Ms. Aung San Suu Kyi was not willing to go against popular opinion and support a dispossessed people.

“It’s dismaying that the new N.L.D.-led government is continuing this wrongheaded effort to police the language of Yangon-based diplomats about the Rohingya,” said Phil Robertson, deputy director for Asia at Human Rights Watch.

Mr. Kyaw Zay Ya said that Ms. Aung San Suu Kyi had not ordered the Americans to stop using the word or threatened consequences if they did.