Hissène Habré, Ex-President of Chad, Is Convicted of War Crimes

France to press for U.N. support for Africa force to fight Boko Haram

France to press for U.N. support for Africa force to fight Boko Haram Abdoulaye Massalaki, Reuters 22 February 2015   NIAMEY (Reuters) – France will support a bid by the African Union to win the backing of the U.N. Security Council for its five-nation force fighting Islamist militant group Boko Haram, French Foreign Minister Laurent Fabius said on Sunday. Fabius spoke on a tour of Chad, Cameroon and Niger, countries that have launched operations 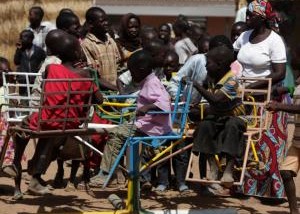 Nigerian refugees strain Chad, Niger Misha Hussain and Abdoulaye Massalaki, IOL News 13 January 2015   Dakar/Niamey - Some 20 000 Nigerians have fled to Chad, Niger and Cameroon in the past two weeks after their towns and villages were attacked by Islamist sect Boko Haram, according to the United Nations and government figures. The influx of refugees has put further strain on some of the poorest nations in Africa, which are already struggling

Regional leaders step up Boko Haram fight with troops, command centre By Bate Felix, Reuters 8 October 2014 Niamey (Reuters) – Leaders of Niger, Nigeria, Chad and Benin on Tuesday announced plans to step up the fight against Boko Haram with an additional battalion and a command centre to tackle the militants whose insurgency has spread beyond Nigeria, a statement said. Boko Haram’s violent five-year campaign for an Islamic state has killed thousands

Darfuri Refugees in Eastern Chad: Among world’s most forgotten people, and increasingly abandoned

Darfuri Refugees in Eastern Chad: Among world's most forgotten people, and increasingly abandoned  By Eric Reeves, Sudan researcher and analyst 8 July 2014    [Note: This is the first of a series of briefs looking at the many aspects of ongoing catastrophe in Darfur and the western region of Sudan as a whole; over the coming weeks and months I will post sustained analyses of: Rape—A topic that the UN and UNAMID refuse to raise in a serious

News alerts, personal stories, and articles on Chad can be sent to communications@genocidewatch.org with the subject line “Chad”