Palestine accuses Israel of opening dams, flooding Gaza, forcing evacuations RT 23 February 2015   Palestinian officials say hundreds of Gazans were forced to evacuate after Israel opened the gates of several dams on the border with the Gaza Strip, and flooded at least 80 households. Israel has denied the claim as “entirely false.” In the wake of a recent severe winter storm in the region, Israeli authorities opened the floodgates to discharge

Desperation Drives Gazans Over a Fence and Into Israeli Prisons Jodi Rudoren and Majd Al Waheidi 17 February 2015   EL BUREIJ, Gaza Strip — It was not much of an escape. Moments after Ibrahim al-Awawda climbed over the nine-foot fence separating the Bureij refugee camp on Gaza’s eastern edge fromIsrael, he was surrounded by six Israeli soldiers. They arrested him, interrogated him and, after he had spent a month in two Israeli prisons, sent 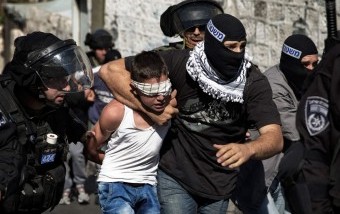 The Israeli Consensus – A policy for refugees and immigrants in Israel

The Israeli Consensus - A policy for refugees and immigrants in Israel October 2014 update from Combat Genocide Association Statement of Principles regarding refugees and immigrants in Israel   When Israel was founded a few short years after the Holocaust, few imagined that it would be a sought after refuge for many non-Jews from all over the world. However, the world has changed, and unlike Israel, many new countries created since the second world

New Light on Hamas Role in Killings of Teenagers That Fueled Gaza War By Isabel Kershner, The New York Times 4 September 2014 The abduction and killing of three Israeli teenagers in the occupied West Bank in June, which helped fuel the biggest escalation in Palestinian-Israeli tensions in years, was set in motion by Hamas operatives from a local Palestinian clan and was financed with about $60,000, mostly obtained through a relative who worked for

Egypt Militants Post Beheading Video ABC News 28 August 2014 An al-Qaida-inspired militant group in Egypt has posted an online video showing the beheading of four men in the Sinai Peninsula accused of spying for Israel, whose bodies were found earlier this month. The Ansar Beit al-Maqdis group, whose name means Champions of Jerusalem in Arabic, posted a 30-minute video showing detailed confessions of the four men. The four said that in exchange for

Are Protests Against Israel Anti-Semitic? Ask the Germans By ANNA ALTMAN, The New York Times August 13, 2014   Protests against Israel’s use of force in Gaza — some peaceful, some violent — have proliferated across Europe, and they have made many people wonder if anti-Semitism is on the rise. In Germany, because of the country’s history and the laws established in the aftermath of World War II, the question is particularly sensitive.

Apartheid's legacy lives on: South Africans polarized over Israel   By Heidi-Jane Esakov, 927Mag   August 12, 2014   In South Africa’s highly polarized debate on Israel-Palestine, the organized Jewish community’s refusal to acknowledge the unequal treatment of Palestinians at the hands of the Israelis is seen as emblematic of all that apartheid stood for.   In what is being touted as one of the biggest demonstrations in Cape

Gaza Strip: Britain to Suspend Arms Exports to Israel 'If Fighting Continues' By Ewan Palmer, International Business Times August 12, 2014   The UK government has announced it will suspend 12 licences for exports to Israel if the current ceasefire in Gaza does not hold. A review into the arms exports currently been shipped to Israel by the UK found a "vast majority" are for items that cannot be used by the Israel Defence Forces (IDF) as part

Agreeing to More Talks in Egypt, Israelis and Palestinians Begin Latest Cease-Fire By ISABEL KERSHNER and MERNA THOMAS, The New York Times   August 10, 2014   JERUSALEM — Israeli and Palestinian negotiators on Sunday accepted Egypt’s proposal for a new 72-hour cease-fire in the Gaza fighting, which began one minute after midnight on Monday, and agreed to resume Egyptian-mediated negotiations toward a more durable solution. But several