War crimes court revokes Serb nationalist Seselj's compassionate release Thomas Escritt and Matt Robinson, Reuters 30 March 2015   (Reuters) - A Serbian politician charged with war crimes has been ordered to return to The Hague by judges who said he had breached the terms of compassionate release under which he had been allowed to live his remaining days in his homeland. Vojislav Seselj, 60, was released in November due to his terminal cancer,

When are atrocities not considered genocide? UN says intent and number of victims are key factors

When are atrocities not considered genocide? UN says intent and number of victims are key factors National Post 9 February 2015   In its recent ruling neither Croatia or Serbia committed genocide, the UN’s highest court showed how high the bar is set to prove genocide. Intent is an important factor, as well as the numbers killed, The Post’s Steven Gelis reports: What’s the definition of genocide? The UN’s convention says it must be “committed

UN court dismisses Croatia and Serbia genocide claims BBC News Europe 3 February 2015   The International Court of Justice has rejected claims of genocide by Serbia and Croatia against each other during the Croatian war of secession from Yugoslavia. The Croatian government had alleged that Serbia committed genocide in the town of Vukovar and elsewhere in 1991. Serbia later filed a counter-claim over the expulsion of more than 200,000 Serbs from

Top UN court to rule in Croatia, Serbia genocide claims Expatica 1 February 2015   The UN's highest International Court of Justice on Tuesday hands down its ruling in a long-running genocide case that could reopen old wounds between former foes Croatia and Serbia. Zagreb in 1999 dragged Belgrade before the ICJ on genocide charges relating to Croatia's war of independence that raged in 1991-95 following the collapse of the former Yugoslavia.

Probe against Serbian general is only the first, prosecutor says 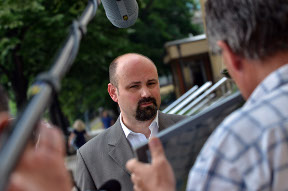 Probe against Serbian general is only the first, prosecutor says By Igor Jovanovic, Southeast European Times in Belgrade August 14, 2014   A war crimes investigation of Serbian General Dragan Zivanovic for atrocities carried out in Kosovo in 1999 marks the beginning of investigations against senior police and military officials who have not been tried in The Hague, an official said. "It is difficult to say who would be prosecuted because it

News alerts, personal stories, and articles on Serbia can be sent to communications@genocidewatch.org with the subject line “Serbia”

[caption id="" align="aligncenter" width="304"] (C) BBC[/caption] A country profile for Serbia is being updated and will appear on the Country Profile page of Serbia as soon as possible.

Denouncing Serbian Tilt, U.S. Boycotts U.N. Meeting By Rick Gladstone, The New York Times 10 April 2013 The United States boycotted a United Nations General Assembly meeting on Wednesday, organized by the former Serbian foreign minister who is the body’s current president, that in theory was about the role of international criminal justice but appeared to be a thinly disguised Serb complaint forum about the war-crimes tribunal for the former Yugoslavia.