Trump Mines Grievances of Whites Who Feel Lost Nicholas Confessore,  The New York Times  14 July 2016 Image: A Donald J. Trump rally last week in Raleigh, N.C. Mr. Trump is voicing the bewilderment and anger of whites who do not feel at all powerful or privileged. CreditStephen Crowley/The New York Times The chant erupts in a college auditorium in Washington, as admirers of a conservative internet personality shout down a black protester. It 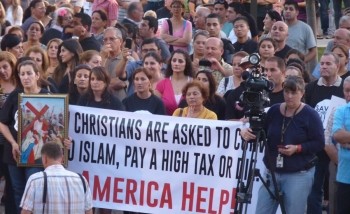 L.G.B.T. People Are More Likely to Be Targets of Hate Crimes Than Any Other Minority Group

L.G.B.T. People Are More Likely to Be Targets of Hate Crimes Than Any Other Minority Group Hereon Park and Iaryna Mykhyalyshyn, The New York Times  16 June 2016  Image: Photo: Sarah Rice/Getty Images Even before the shooting rampage at a gay nightclub in Orlando, Fla., lesbian, gay, bisexual and transgender people were already the most likely targets of hate crimes in America, according to an analysis of data collected by the Federal Bureau

Mississippi Ends Inquiry Into 1964 Killing of 3 Civil Rights Workers Campbell Robertson,  The New York Times  20 June 2016 Image: “I am convinced that during the last 52 years, investigators have done everything possible under the law to find those responsible and hold them accountable,” said Jim Hood, the Mississippi state attorney general, at a news conference. CreditRogelio V. Solis/Associated Press The investigation into the 1964 murders

The N.R.A.’s Complicity in Terrorism

The N.R.A.’s Complicity in Terrorism The Editorial Board, The New York Times  16 June 2016 Image: Marina Muun, The New York Times  “America is absolutely awash with easily obtainable firearms,” one spokesman for Al Qaeda said in a 2011 recruitment video. “So what are you waiting for?” Few places on earth make it easier than the United States for a terrorist to buy assault weapons to mow down scores of people in a matter of minutes. The

American ISIS fighter who ‘found it hard’ returns to face criminal charges Matt Zapotosky, The Washington Post 9 June 2016 Image: Mohamad Khweis in 2010. (Fairfax County Police) A Northern Virginia man who joined and then fled the Islamic State before being captured by Kurdish fighters in Iraq was flown back to the United States late Wednesday to face trial. Mohamad Khweis was charged in federal district court in Alexandria with providing and

F.B.I. Steps Up Use of Stings in ISIS Cases

F.B.I. Steps Up Use of Stings in ISIS Cases Eric Lichtblau, The New York Times  June 7 2016 Image: Michael German, a former undercover agent with the F.B.I. who researches national security law at New York University’s Brennan Center for Justice, said the agency was “manufacturing terrorism cases.” Credit Nancy Borowick for The New York Times  WASHINGTON — The F.B.I. has significantly increased its use of stings in terrorism cases,

'An American Genocide,' by Benjamin Madley Alan Taylor, The New York Times 1 June, 2016 The state of sunshine and pleasure is drenched in the blood of Indians, the victims of mass killings. These peaked between 1846, when Americans conquered California from Mexico, and 1873, when they snuffed out the last group resistance by natives in the state. The slaughter of California’s Indians was rapid and thorough even by the grim standards prevailing

The Dangerous Cycle of Dehumanization

The Dangerous Cycle of Dehumanization Michael Gerson, Pittsburgh Post Gazette 14 May 2016 “A significant part of the Roma are unfit for coexistence. These Roma are animals, and they behave like animals. ... Inarticulate sounds pour out of their bestial skulls. ... These animals shouldn’t be allowed to exist. In no way. That needs to be solved — immediately and regardless of the method.” WASHINGTON — These words were written, not in 1943,