Nazi Art Loot Returned ... to Nazis Doreen Carvajal and Alison Smale, The New York Times  14 July 2016 Image: Heinrich Hoffmann, who was Hitler’s personal photographer, after World War II. According to archival documents, he sought to claim a list of 278 paintings that had been confiscated by units like the Monuments Men, an Allied group devoted to recovering and returning looted art. Years after World War II, American officials here entrusted 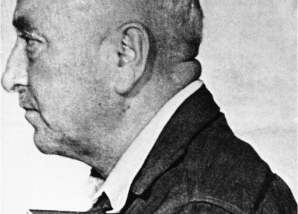 ‘Anatomy of Malice,’ by Joel E. Dimsdale The Enigma of the Nazi War Criminals BELINDA COOPER, The New York Times  May 27 2016 Image: Dr. Robert Ley, a war criminal whose brain was removed for study after his suicide. CreditAssociated Press Are evildoers monstrous psychopaths, or is the capacity for wickedness inherent in every human being? The question never ceases to fascinate, and despite the myriad horrors of our time, the Nazis continue

Iran’s Holocaust denial is part of a malevolent strategy

Syria and the Holocaust: Putting ‘Never Again’ to the test

Syria and the Holocaust: Putting ‘Never Again’ to the test Robert Satloff, The Washington Post  3 May 2016 Image: A girl looks through a fence at a camp for migrants and refugees near the Greek village of Idomeni not far from the Greece-Macedonia border on Sunday. (Tobias Schwarz/Agence France-Presse/Getty Images) As our nation’s leaders gather under the Capitol Rotunda for the annual remembrance of the Holocaust on Yom HaShoah, we should

Op-Ed: Indifference Kills Roger Cohen, New York Times  8 October 2015   Image: copyright of © Serenade to the Wind. All Rights Reserved. MILAN — “Indifference” is the word engraved on the stark wall at the entrance to Milan’s Holocaust memorial, housed beneath the central railway station from which Jews were deported to Auschwitz and other Nazi camps. The premises vibrate when trains depart overhead, as if mirroring the shudder the

Letter to the Editor: U.S. Could Have Done More to Save the Jews

U.S. Could Have Done More to Save the Jews Letters to the Editor, Wall Street Journal 1 October 2015 There was no conflict between ending the war and helping the Jews. Geoffrey Ward’s review of Jay Winik’s “1944” (Books, Sept. 19) defends the claim by Assistant Secretary of War John McCloy in 1944 that a U.S. bombing raid on Auschwitz or the railways leading to it would have been “impracticable” and “could be executed only by the diversion

The Next Genocide Timothy Snyder, New York Times 12 September,  2015    Image: In Sudan, drought led to conflict and the displacement of many civilians. Credit Lynsey Addario for The New York Times New Haven — BEFORE he fired the shot, the Einsatzgruppe commander lifted the Jewish child in the air and said, “You must die so that we can live.” As the killing proceeded, other Germans rationalized the murder of Jewish children in the same way:

'Accountant of Auschwitz' jailed for the murder of 300,000 Jews Kate Connoly, The Guardian 15 July 2015   Image: Oskar Gröning pictured during his trial in Lueneburg, northern Germany. Photograph: Reuters Judge in German court says 94-year-old former SS guard Oskar Gröning helped ensure smooth running of the Nazi killing machine A former SS guard known as the ‘accountant of Auschwitz’ has been sentenced to four years in prison for being

Greece’s new prime minister wants Germany to pay for Nazi war crimes Washington Post 26 January 2015   After the seismic victory of Greece’s leftist Syriza party in national polling Sunday, the country’s new prime minister, 40-year-old Alexis Tsipras, is leading all of Europe down an uncertain path. Syriza has vowed to renegotiate the crippling debts saddled on the Greek economy by European lenders — a move that some fear could threaten

Some Holocaust lessons being forgotten as survivors gather at Auschwitz 70 years on Vanessa Gera, The Associated Press 26 January 2015   OSWIECIM, Poland - A decade ago, 1,500 Holocaust survivors travelled to Auschwitz to mark the 60th anniversary of the death camp's liberation. On Tuesday, for the 70th anniversary, organizers are expecting 300, the youngest in their 70s. "In 10 years there might be just one," said Zygmunt Shipper, an 85-year-old