A Khmer Rouge prisoner recalls the shocking moment he was forced to witness the execution of a woman whose liver was then removed and cooked in front of him, a court heard.

The trial of the top regime leaders focuses on the genocide of ethnic Vietnamese and Muslim minorities including the Cham. 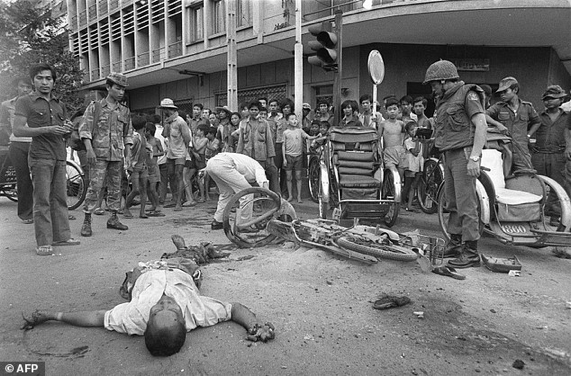 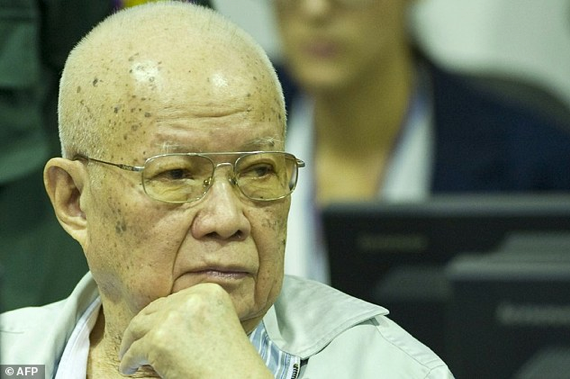 Meu Peou openly wept as he described how he was just a boy when he was detained in western Pursat province accused of betraying the hardline communist cadres by stealing rice.

At the detention camp he witnessed a woman being killed, he said, giving the court graphic details of her brutal murder.

‘She was asked to take off her clothes and her body was cut open. There was blood everywhere… her liver was taken out and was cooked for a meal,’ he recounted, through a court translator.

Until this trial, the treatment of the two minority groups has rarely been discussed.

Meu Peou said he lost 17 relatives during the murderous rule of the hardline regime, including his father who starved to death after he refused to eat pork.

‘I had to force myself to eat pork so I could survive,’ Meu Peou said, adding Muslims were often forcibly dispersed from their villages. 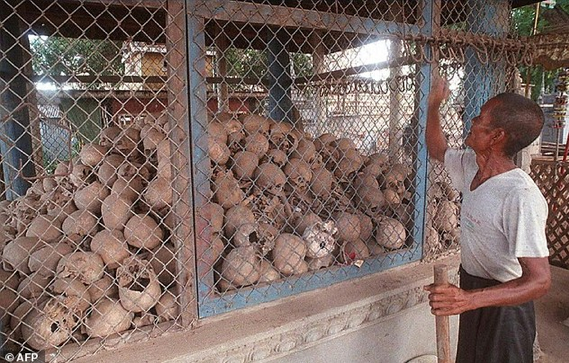 Skulls and bone fragments of victims of the 1975-79 Khmer Rouge regime at the Champuk Kaek pagoda in Kandal province, south of Phnom Penh in 1997

Nuon Chea and Khieu Samphan have already been handed life sentences in a previous trial that focused on the regime’s forced evacuation of Phnom Penh into rural labour camps and murders at an execution site.

Cannibalism by Khmer Rouge soldiers has previously been described by other witnesses who testified at the court, including of cadres eating the gall bladders of executed prisoners after drying them in the sun.

While cannibalism was not widespread, the regime’s leadership encouraged a searing hatred among its footsoldiers of those seen to be class enemies that led at times to particularly sadistic violence.

Historians have offered different reasons for cannibalism, from the general climate of excessive regime violence, to superstitious beliefs about acquiring an enemy’s power through the consumption of their organs to hunger and desperation within the Khmer Rouge’s ranks.

The Khmer Rouge regime dismantled modern society in Cambodia in their quest for an agrarian Marxist utopia.

Many key leaders have died without facing justice, including ‘Brother Number One’ Pol Pot who died in 1998.

In 1975 the Khmer Rouge triumphed over the US-backed republican army of Lon Nol – sparking four years of a genocidal communist revolution.

Initially, the Khmer Rouge were given a cautious welcome by Phnom Penh’s war-weary residents as they entered the city astride tanks, their distinctive red-chequered scarves fluttering behind them.

But soon enough cadres began to evacuate the city of two million people at gunpoint, in one of the largest forced migrations in recent history.

The sick, elderly and very young perished, their bodies littering the roadsides, as ‘bourgeois’ city dwellers were marched into the countryside to scratch a living from the parched soil. 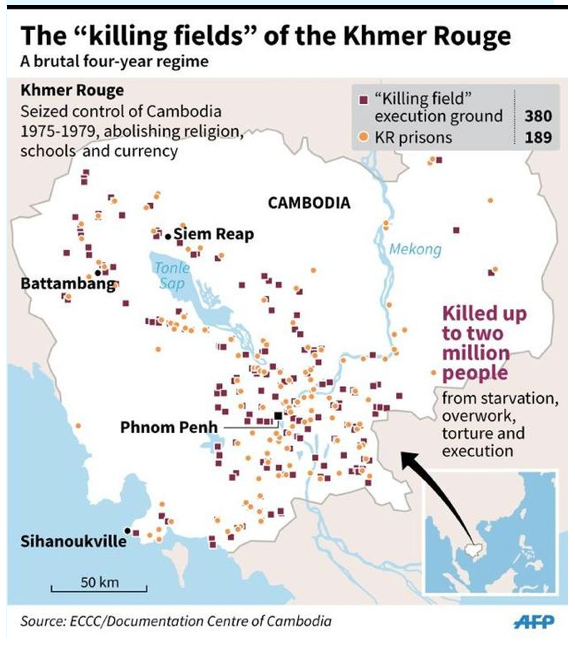 By the time the tyrannical rule of Pol Pot — or ‘Brother Number One’ — was ousted four years later, an estimated two million Cambodians had been killed by execution, starvation or overwork as the Khmer Rouge drove the country back to ‘Year Zero’ through an agrarian peasant revolution.

‘Forty years ago Pol Pot turned Cambodia into a hell — a ghost land,’ Huot Huorn, 67, told AFP with tears in her eyes after lighting incense for the 36 relatives she lost to the regime.

‘I still hate that regime… their sins are vivid in my eyes now. They starved us, jailed people with no food and water until they died… I saw them smash children’s heads against a tree trunk.’

Only after the regime was forced out by Vietnamese soldiers in 1979 did the scale of its atrocities emerge, with the bones of thousands of victims — including children — uncovered at mass graves across the country, including at Choeung Ek.

Many had first suffered at Phnom Penh’s notorious torture house — Tuol Sleng, or S21 — as perceived enemies of the revolution.

The former school-turned-torture-chamber has also been preserved as a grisly testament to the horrors of the era, which ended when the Khmer Rouge were forced to retreat to jungle hideouts.

He was the first person to be held accountable for the regime’s crimes.

I first came to this village in Takeo province (then known as Phum Khmer Leu or Original Khmer village) in 1967-68. As a city boy of Phnom Penh, all kids in the village viewed me as someone very special. Keo Thy was one of them and she is one year younger than me.  I returned to the village again in 1969 — I think when my grandfather died.  Since then, the war had descended on the area and I did not return to the village until 1975.

When I returned in April, 1975, I came to the village alone… I was 14, knowing no one. I only knew the name of the village.  It was Keo Thy and her sister, Keo Souch who took me to their home, looked after me, protected me, fed me, and treated me with the highest respect a human can be treated. We never spoke — perhaps they knew how afraid I was at the time. They were always around me when I needed water or food and Keo Thy never hesitated in looking after anything I needed.  I didn’t realize that she risked her life by just doing that for me. Then I was sent by train to Battambang province – Northwestern part of Cambodia.

I only met both of them again in 1995, when I returned to the village to see them, or whenever they visited me at Documentation Center of Cambodia. Whenever we saw each other, it was with great love, smiles and a kinship that is not describable by words. They were always afraid to ask me for help in spite of being very poor.

Last Pchum Benn (Cambodian ancestor holiday) in 2013, I felt compelled, seemingly by God himself, to visit her.  I went to see her and for the first time in 40 years, Keo Thy took me around the village telling me the history of our ancestors, which up to that day I knew so very little. She showed me the rice fields where I used to live and where her mother (Keo Ny) was buried during the war. The next day I flew to London to meet with Zaha Hadid, a world-famous architect.  In the blink of an eye, I was transported from the humble village surroundings that I call home.

It is not the first time I have left people, family and home behind. Indeed, for the sake of victims, memory, justice and reconciliation, I have often had to turn my back on my closest friends and family.

Despite the immense work in front of me, however, I could not stop thinking about her. I had a sinking feeling that something bad was going to happen to her life. The other part of me told me to stop worrying and this was just a bad dream. I never knew that it would be the last time I would see her again.

And now she has passed away. A victim of liver failure brought on by the same chemical fertilizer she used to grow rice. Many farmers in Cambodia use this particular fertilizer to grow rice today, and one wonders whether if she did not use this fertilizer, whether she would still be alive today. 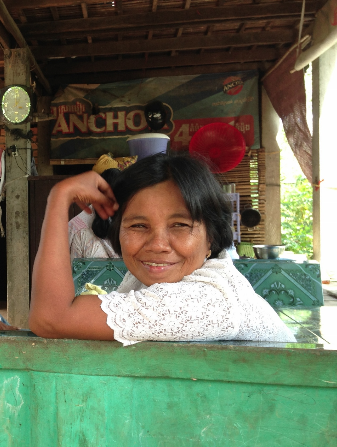 Now, all I am left with is deep regret and sadness for never looking after her the way she did for me.

They say that extreme hardships bring out the best in people.  Indeed it is during extreme hardship you find people with the purest hearts and kindest souls. Keo Thy was one of these people and my deepest regret is that I could never return in kind the immense love and care she bestowed unto me. I hope she forgives me.  I will forever be in her debt.

Photo of Keo Thy

I, personally, who was in charge S-21 as the director, was responsible for the criminal mechanism and I am determined to take legal and moral responsibility for all the crimes committed at S-21. And, secondly, I, Kaing Guek Eav alias Duch, was not in charge of all the security centres throughout the country, but I was a member of the Communist Party of Kampuchea and as such I still carry the moral weight of all the crimes perpetrated against the people and nation of Cambodia throughout that regime. I deserve whatever punishment the Cambodian people may mete out. When I am personally challenged before the victims, the many widows, the orphans – I accept that they condemn me. I bow before them so that they can see that I have acknowledged my crimes. It is unfortunate that some of the widows did not have the opportunity to come here… (read more statements)

The Supreme Court Chamber of the Extraordinary Chambers in the Courts of Cambodia (ECCC) today sentenced KAING Guek Eav alias Duch to life imprisonment, the maximum sentence available under the law, for crimes against humanity and grave breaches of the 1949 Geneva Conventions.

Granting an appeal from the Co-Prosecutors, the Supreme Court Chamber quashed the 35 years sentence imposed by the Trial Chamber on 26 July 2010, and by supermajority also quashed the Trial Chamber’s decision to grant a remedy for the violation of KAING Guek Eavs’s rights occasioned by his illegal detention by the Cambodian Military Court between 10 May 1999 and 30 July 2007. The Supreme Court Chamber dismissed an appeal from KAING Guek Eav in which he alleged that he did not fall within the personal jurisdiction of the Court, holding that, whether an accused is a senior leader or one of those most responsible are exclusively policy decisions for which the Co-Investigating Judges and Co-Prosecutors are accountable. (Read More)

Why Did You Abandon Us?
By Gregory Stanton, The Free-Lance Star
Fredericksburg, Virginia
September 30, 2007

“Why did you abandon us?” Those were the haunting words of a survivor of the Cambodian killing fields in 1980. I was the Field Director in Cambodia for the American relief program that included Church World Service, CARE, Lutheran World Relief, and other organizations. The woman who asked me that question saw her husband executed and her children starve under the communist Khmer Rouge. I had no good answer. I could have said, “Because we got tired of fighting and Congress cut off the funds. Our soldiers’ lives were worth more than your lives.” But I knew that I was partially to blame myself.

I was active in the anti-war movement. I believed, and still believe, that the American bombing and invasion of Cambodia and support for Lon Nol’s overthrow of Prince Sihanouk were both strategically stupid and evil. I am still furious that Nixon and Kissinger inflicted a secret bombing on Cambodia that drove Sihanouk and many other Cambodians into the murderous arms of the Khmer Rouge. President Ford predicted a bloodbath if they took over. George McGovern said it would not happen. Ford was right. McGovern, to his credit, saw he was wrong by 1977– Cambodia was drenched with blood — and advocated international intervention to overthrow the Khmer Rouge. But his change of heart came too late. The U.S. was tired of war in Southeast Asia. So we did nothing. Two million people died. (read more)

Perfection is the Enemy of Justice: A Response to Amnesty International and Human Rights Watch’s Criticisms of the Agreement Between the Cambodian Government and U.N. to Establish the Khmer Rouge Tribunal, by Gregory H. Stanton

The Establishment of a Tribunal for Genocide from 1975-1979 in Cambodia, by Suan Visal, LL.M. University of Hong Kong 2002

A Quest for Justice, by Brian D. Shaw

His Brothers’ Keeper, by Michael Matza, 1983

The Cambodia Tribunal Monitor: the primary source for news and information on the Extraordinary Chambers in the Courts of Cambodia (ECCC)

Extraordinary Chambers in the Courts of Cambodia