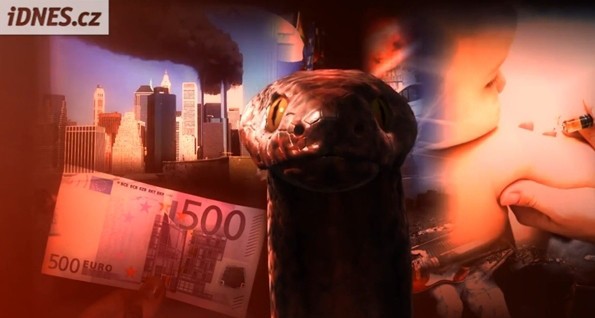 PARIS — The campaign advertisement in the Czech Republic begins with a snake slithering out of a red European Union flag and a montage of pictures of supposed threats to Czech identity, including a 500-euro note, an Israeli flag and a gathering of Orthodox Jews.

“The European Union is an evil which produces more evil — it is our duty to confront it,” the voice-over says. “Let’s kill the snake!”

The advertisement is the work of Adam B. Bartos, a 34-year-old Czech journalist who is running in May elections for the European Parliament. He is campaigning with an anti-Semitic appeal, and regularly updates a list of 220 prominent Jews he accuses of dominating Czech life. He has called for the country to leave the European Union, which he portrays as a malign “superstate” undermining Czech sovereignty.

The Czech public broadcaster refused to air the ad, which circulated on social media instead, a symbol of the increasing boldness of the far right in the country and across the region, fueled by dissatisfaction with the post-1989 political and economic order.

Parties outside the political mainstream are expected to win as many as a quarter of the 750 seats in the European Parliament in European elections that start on May 22, according to recent polls, as far-right leaders, from France to the Czech Republic, portray the European Union as a gateway for illegal immigrants, an emblem of unrestrained markets and a threat to national sovereignty. Marine Le Pen, the head of France’s far-right National Front, has said she expects her party and like-minded groups to get enough votes to give credibility to an ultraconservative movement that spans international borders.

But while groups in western Europe like the National Front and Britain’s United Kingdom Independence Party are trying to recast themselves as mainstream parties — Ms. Le Pen has sought in particular to distance herself from the anti-Semitism that was long a component of her party’s identity — some in Eastern and Central Europe see political opportunity in the extremes.

While still a marginal figure, Mr. Bartos has drawn particular concern among human rights groups because some of his previous work was praised by the conservative former Czech President Vaclav Klaus, who has since distanced himself from Mr. Bartos. Mr. Bartos’s campaign has also deeply alarmed the Czech Jewish community, for whom memories of World War II, when an estimated 80,000 Jews were rounded up and exterminated, still run deep.

“My parents and grandparents were once on a similar list, and some of them ended up in gas chambers,” said Milan Uhde, a 77-year-old playwright, former anti-communist dissident and government minister in the 1990s, who is No. 2 on the list.

Mr. Bartos said in an interview that he had previously admired Jews; he was one of several thousand people who blocked a march by a neo-Nazi group through Prague’s historic Jewish quarter in 2007. But he said his views had changed, amid concerns that “Zionists” exerted a strong hold over the country.

Levels of anti-Semitism in the Czech Republic remain very low compared with some other countries in the region, including Poland and Hungary, according to an annual report published last week by Prague’s Jewish community. But analysts said that the rise of the far right, and the baiting of minorities, was nevertheless gaining ground.

Featured Image: “In the offending ad, a digitally animated snake slithers in front of a variety of images, including a Star of David, smiling rabbis, a vaccination, a €500 note and smoke pouring from New York’s Twin Towers,” according to The Economist. (iDNES.cz)