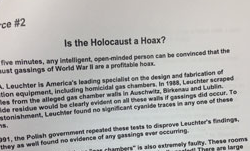 Several years ago, I attended the bar mitzvah of a friend’s son. Uniquely in my experience — and, I’d bet, most people’s experience — all of the boy’s four grandparents were Holocaust survivors. In the middle of the ceremony, one grandfather interrupted: “I have something to say.” He recalled holding his grandson for the first time 13 years earlier and exclaiming aloud, “Hitler, you bastard, I beat you!”

Most Holocaust survivors did not have the option of direct vengeance against their oppressors. They counted their victories in survival, in descendants, and in the transmission of memories. But nearly 70 years after the end of World War II, the stock of living memories is dwindling. Not many remain who can still address the Fuhrer in the first person: “ I beat you.”

According to a recent global survey by the Anti-Defamation League, two-thirds of respondents either had never heard of the Holocaust or believed historical accounts were exaggerated. And the ignorance is concentrated among the young. This school year, in California’s Rialto Unified School District, eighth-grade students were asked to write an essay on whether they believed the Holocaust “was an actual event in history, or merely a political scheme created to influence public emotion and gain wealth.”

Note “scheme” and “wealth” — words that Jews have heard before. School officials were forced to cancel the assignment. Which National Review’s Charles C.W. Cooke described as a “damn shame” — the cancelation, not the assignment. Cooke complained that academic discussion is too often “conducted between narrow and sternly policed rails.” The purpose of education is to cultivate critical thinking, not “to indoctrinate our children with the values of the state.”

The application of ideology in this case — an all-purpose conservative critique of political correctness — is intellectually lazy. But the assumption of two-sidedness when considering the Holocaust is positively dangerous.

The argument requires a morally offensive false equivalence. Academics, for example, vigorously debate the causes of grievances that lead to international terrorism. Crackpots claim that the Sept. 11, 2001, attacks were plotted by the Jews. Any teacher who confuses these two types of argument cultivates ignorance and bigotry. The same is true for an eighth-grade teacher who poses the questions: Was Anne Frank’s diary a forgery? Was the Wannsee Conference just a staff retreat? Were the Nuremburg trials a kangaroo court?

In this case, the assertion of two-sidedness is a victory for one side. Holocaust denialists crave academic validation above all else, hoping to gain legitimacy for pseudo-history. It is an effort that began during the event itself, with systematic attempts to destroy evidence and create historical doubts. It didn’t quite work. When the Germans were forced to retreat from Birkenau, they burned 29 storehouses full of incrimination. In the six that remained, however, the Red Army found 836,255 dresses, 348,000 men’s suits and 38,000 pairs of shoes.

The educational enterprise is not just a matter of teaching critical thinking — the cultivation of lawyers and Oxford debaters. It also involves the training of moral sentiments; teaching children to love what is lovely and disdain what is hateful. When school tours visit the U.S. Holocaust Memorial Museum, children are not gaining information about a historical controversy. They are, hopefully, learning to recoil from brutality, bullying and the abuse of the weak. It may be their first glimpse at the reality of evil — lurking in average people, enabled by ideology on a massive scale.

Instead of asking children what they make of the Holocaust, it is worth teaching eighth-graders what the Nazis made of children. Historian Martin Gilbert recounts that at Birkenau, boys aged 14 and 15 were harnessed to carts normally pulled by horses. They transported logs that were used in the crematoria ovens. They were also forced, as one child later recalled, to spread the ash of victims on camp pathways “so that people could walk on the road and not slip.” Human ash for traction.

They wanted their stories known. A doctor named Aharon Beilin described meeting a boy working at Birkenau who had been castrated in a medical experiment. The child asked to be examined. “I said I could not help him,” Beilin recalled, “but the boy said, ‘No, I want you to see what they are doing.’”

About 1.4 million Holocaust victims were under the age of 14. It is one of the most solemn responsibilities of educators to make a new generation see what was done.

Featured Image: Rialto Unified students were reportedly asked to turn in reports similar to the one pictured above entitled, “Is The Holocaust A Hoax?” (Photo credit: Tom Wait)