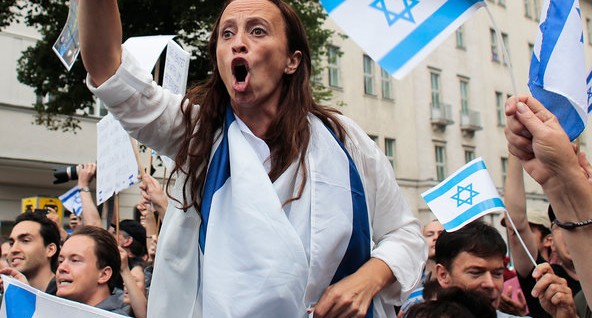 Protests against Israel’s use of force in Gaza — some peaceful, some violent — have proliferated across Europe, and they have made many people wonder if anti-Semitism is on the rise.

In Germany, because of the country’s history and the laws established in the aftermath of World War II, the question is particularly sensitive.

A recent demonstration against Israel in Berlin devolved intochants of “Jude, Jude, feiges Schwein, komm heraus und kämpf allein” (“Jew, Jew, cowardly pig, come out and fight”). Two men were arrested in the western German city of Wuppertal for attacking a synagogue with firebombs. Dieter Graumann, the president of the Central Council of Jews in Germany, was quoted in a story in The New York Times: “When calls for Jews to be gassed, burned and murdered are bawled on the streets of Germany, that no longer has anything to do with Israel’s politics and Gaza. It is the most abhorrent form of anti-Semitism.”

Israel’s right to exist is designated as “Staatsraison” in Germany — a part of the law that establishes Israel’s existence as a core national interest. Germany’s alliance with Israel is not just policy but integrated in the very fabric of the country’s post-World War II governments.

Germany also has strong laws against Volksverhetzung, or “hate speech,” including denying the Holocaust and any display of Nazi-associated paraphernalia. This means that demonstrations against Israeli policy are carefully scrutinized. A column by Sebastian Hammelehle in Der Spiegel argues that Germans must be especially careful of how they express themselves: “Whoever criticizes Israel should pay close attention to what and in what tone he says it — especially as a German. Exactly because of its past, Germany is not a neutral third party.” (Translations throughout are the author’s own.)

Many in Germany, even those who believe that criticism of Israel should be permitted, believe that speaking out against the country’s policies expresses some latent anti-Semitism. Wolfgang Benz, director of the Center for Research on Antisemitism at the Technical University in Berlin, was quoted in an article in Die Zeitarguing that the recent protests are not an indication that anti-Semitism is growing; on the contrary, it has always been there. “Anti-Semitism has existed at a fairly constant level for decades. Events like the war in Gaza can lead to temporary manifestations of anti-Semitism that are more visible, but they quickly disappear again.”

A politician from the Green Party named Sven-Christian Kindler, who has traveled often to Israel and calls himself a “leftist Zionist,” argues that “it’s completely legitimate and logical that there would be different opinions about the conflict.” But he conceded that “outrage over the situation has to do with the fact that the subject goes deeper. There’s often deep-seated resentment of Jews at play. And that I find frightening.”

Theo Sommer, a former editor in chief of Die Zeit, disagrees. He argues that “sympathy isn’t anti-Semitism.” Brutality has been committed on both sides, he writes, and “to say so doesn’t have the last bit to do with anti-Semitism. After Auschwitz and Theresienstadt and Bergen-Belsen, anti-Semitism is and must remain taboo. … But that cannot and should not prevent us from judging and — in the worst case scenario, condemning — the State of Israel for its actions according to the same standards of human rights and laws of war that we apply to other states.” Mr. Sommer continues, “Of course Israel has a right to self-defense. But, as always with military force, it is paramount that the means remain proportional.” In Mr. Sommer’s opinion, “Israel has criminally violated this imperative.”

Germany’s left, which has increasingly come out against Israel’s policies, has its own particular blind spots. The country’s strong support for Israel can hinder those who are critical from seeing how their comments may be perceived. Hellmuth Vensky wrote in Die Zeit, in 2011, that “exactly because the left believes itself immune to anti-Semitic tendencies, anti-Jewish forms of argumentation can sneak in.” Tanja Dückers likewise questions why the German left has been more apt this summer to criticize Israel than Vladimir Putin’s actions in Ukraine. Ms. Dückers argues this is because of Israel’s association with the United States: “The small country serves as an extension of world power in the region — and thus as a putative component of an imperial policy that seeks to unconditionally secure its own interests against the weak. Criticism of Israel is always to a substantial degree unthinking anti-Americanism.”

All the same, German pundits are calling for citizens to stand up to inklings of anti-Semitism. Sibylle Berg, a columnist for Der Spiegel, writes that “a portion of our citizenry is no longer secure.” Plenty of “Muslim politicians” have “taken a clear stand,” she writes, but she’s heard deplorably little from “German intellectuals.” She asks, “Why is it possible for thousands to mobilize against a new train station or against the transport of atomic waste, but when it’s about our neighbors, our empathy weakens?”

Whether or not Germany is experiencing a true resurgence of anti-Semitic sentiment, Israel seems to have lost the P.R. war in Europe. Ishaan Tharoor writes in The Washington Post that European leaders have been harsh in their criticism of Israel, and that many countries are seeking to curtail business agreements with Israel. It is one of the many consequences of the conflict in Gaza that Israel will have to address in coming weeks.