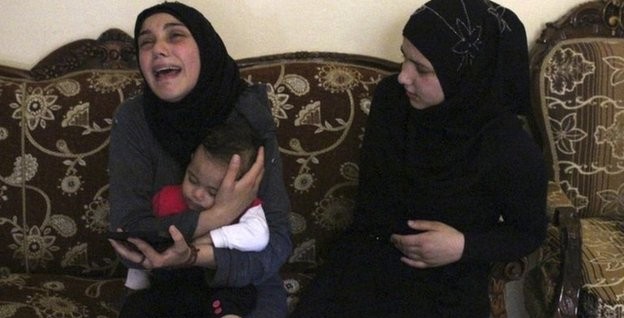 The alleged beheading of Lebanese army sergeant Ali al-Sayed detained by the Islamic State is a war crime if confirmed, Human Rights Watch said today. Photos and a video were posted online on August 28 purportedly showing an Islamic State militant beheading a blindfolded man who is identifiedas Sergeant al-Sayed. Lebanese authorities have not yet officially confirmed the beheading.

“The alleged beheading of Sergeant Ali al-Sayed is a horrific act and if true, would amount to a war crime,” saidSarah Leah Whitson, Middle East director at Human Rights Watch. “We remain concerned about the fate of the remaining captives.”

Abu Musaab Hafid al-Baghdadi, who identifies himself as a member of the Islamic State, posted photos on his Twitter account on August 28 purportedly showing an Islamic State militant beheading a blindfolded man who is identified as Ali al-Sayed.

The Committee of Muslim Scholars, an association of Sunni religious scholars based in Lebanon, which had been involved in the negotiations with the Islamic State over the detained soldiers, said in a statement on August 29 that they can neither confirm nor deny that the soldier was killed. Interior Minister Nouhad al-Mashnouq told Lebanese news outlets on August 29 that the Lebanese army had formed a committee of experts to investigate the alleged beheading. However, Lebanese security officials and Islamic State members reportedly confirmed the beheading to media outlets and an audio recording was published on August 28 purportedly of a phone conversation during which a representative of the Committee of Muslim Scholars confirms that the beheading took place. On September 1, the Lebanese Broadcasting Corporation reported that al-Sayed’s body was being transported to a military hospital, although they did not cite the source of theirinformation.

The summary execution of anyone detained, including hostages such as al-Sayed, is a war crime, Human Rights Watch said.

A representative from the ISF confirmed to Human Rights Watch that to date, 14 policemen are still being held captive. The army has not issued a list of abducted soldiers. According to media outlets, 12 soldiers remain in custody of the armed groups. In total, 13 soldiers and security personnel have been released.

On August 29 a video was released on youtube in which nine Lebanese soldiers held captive by the Islamic State declared that they will all be executed unless the government releases Islamist detainees from Roumieh prison within the next three days. On August 31, Jabhat al-Nusra threatened to execute Lebanese Shia security forces members if Hezbollah continues its military campaign in the Syrian region of Qalamoun which borders Arsal, local media reported. Hezbollah fighters and Syrian government forces have been battling armed groups in Qalamoun intermittently.

On August 19, Lebanese government officials received a list of demands from the groups in exchange for the release of the hostages. While the list has not been made public, media reports indicate that it includes the release of some Islamist detainees from Roumieh prison in Lebanon.

Taking hostages is a war crime.

The International Criminal Court (ICC) has defined hostage taking as the seizure or detention of a combatant or civilian, combined with threatening to kill, injure, or continue to detain the person, with the intention to compel a government, international organization, or group to act or to refrain from acting as a condition for the person’s safety or release.

International humanitarian workers operating in Lebanon told Human Rights Watch that they have observed an uptick in attacks against Syrian refugees by some Lebanese civilians since the clashes erupted in Arsal. Residents in the northern Lebanese town of Rahbe told Human Rights Watch that several Syrian refugees were physically attacked in the streets by Lebanese civilians following the outbreak of violence in Arsal. Lebanese security forces should remain vigilant against any abuse of Syrian refugees and ensure that anyone responsible for violations is held to account.

“Syrian refugees should not be scapegoated for criminal acts committed by extremist groups such as the Islamic State,” Whitson said.

Background:
On August 2, Lebanese Armed Forces detained Imad Ahmed Jumaa at a checkpoint in the Arsal outskirts. While the Lebanese National News Agency identified Jumaa as a member of the extremist Islamist group Jabhat al-Nusra, Jabhat al-Nusra reportedly denied his membership in the group and other media outlets have identified him as the leader of the Fajr al-Islam Brigade, a group which pledged allegiance in July 2014 to the Islamic State. Following Jumaa’s arrest, unidentified militants, some of whom reportedly belong to Fajr al-Islam, began surrounding Lebanese army checkpoints in and around Arsal and demanding his release. Some of the militants also broke into the Internal Security Forces (ISF) station in Arsal, seized several ISF members there, released several Syrian detainees, and reportedly killed two civilians who tried to stop them.

In addition to the hostages, according to the Lebanese army 19 Lebanese soldiers were killed in the fighting and 86 were wounded, 67 militants were also reportedly killed. In addition a field hospital in Arsal has reported that 489 people were wounded and at least 59 civilians – 44 Syrians and 15 Arsal natives – were reportedlykilled in the fighting.

Featured Image: The family of Ali Sayyed have been asked to provide DNA samples to help confirm the identity of the body. Copyright 2014, Reuters