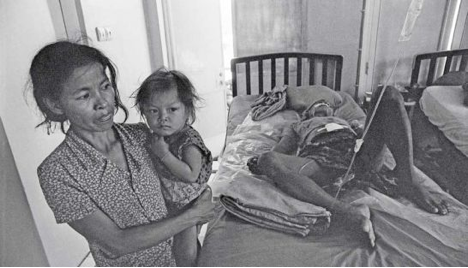 Forty years on: A need for critical genocide studies

April 17 marks the 40th anniversary of the Khmer Rouge (KR) coming to power, after which the Cambodian people endured almost four years of the KR’s radical socialist transformation program between 1975 and 1979.

On April 17, 1975, KR soldiers marched into the capital city of Phnom Penh and began the mass evacuation of the city’s residents to the countryside to fulfil many of the KR’s ambitious national plans and state-building projects. These projects far outweighed the strength of the people and the capability of the KR government after the near complete destruction of the country following the devastating civil war (1970-1975). The mass atrocities carried out ended only in January 1979, with the Vietnamese invasion.

While the KR regime officially ended in 1979, the movement persisted until late 1998 when the last KR cadres, living in the final stronghold of the regime at Anlong Veng, were reintegrated into the social mainstream through both coercive and noncoercive approaches by the government. Even today, the KR legacy continues to cast a shadow over Cambodian society and issues of social mistrust among political actors, politicisation of history, racism against ethnic minorities, authoritarian personality and poor social behaviour remain strongly embedded within our society. At this critical juncture, we need to ask ourselves what has been done to educate the Cambodian public, especially the young generation, about the horrific events that happened in their country 40 years ago.

Since 2004, local initiatives for teaching KR history in Cambodian classrooms have been undertaken under the leadership of the Ministry of Education, Youth and Sport in collaboration with the Documentation Center of Cambodia. However, Cambodia has yet to provide education on critical genocide studies, the topics of which range from cases of genocide to theory of genocide, causes of genocide, colonial genocide, comparative studies of genocide, genocide denial and the mass killings of political groups under Stalin and Maoist China.

The primary demands of critical genocide studies for the Cambodian context are that: (a) politicians will no longer use the KR genocide to justify their political misconducts and to suppress political opponents, and (b) that young Cambodians will not relapse into extremism, radicalism, racism, jingoistic patriotism or extreme nationalism. The Cambodian genocide, itself, has its roots in the resurrection of these extreme characteristics as a precedent for the KR demands for Cambodia to obtain total independence, self-mastery and self-reliance. To maintain longer power, the KR eliminated all political threats and opponents to the state power, through criminalisation and zero-tolerance policies against all perceived enemies and/or critics of the state and its leaders.

Since the second half of the 20th century, dynastic founders or leaders have governed modern Cambodia with absolute command, seemingly claiming a divine ability to read prophecies in order to rule and save the country. This governing structure, whether for good or for bad, has created patterns of social injustice, systematic corruption, nepotism and a culture of impunity in our country. These endemic social problems provided the psychological and ideological groundwork for the KR leaders to cultivate extreme nationalism and racism, which were then injected into the social fabric of Cambodian society in order to bring about a complete social change – only to turn Cambodia from the Angkor-rooted state to the killing fields.

Certain aspects of these extreme characteristics and political tendencies remain active in Cambodian society today, as they will perhaps into the far future, as demonstrated by the violence and political manipulation that occurred after the July 2013 election.

Today, Cambodian identity wavers between the legacy of Angkor and the memory of the killing fields. Thus, critical genocide studies, encouraging critical self-reflection and self-consciousness about the country’s history, will be a key component for us to move our society forward, deal with our social concerns and prevent the repetition of the past horrors.

Drawing lessons from the KR period, schools and universities should be shaped as democratic public spaces, where students are instilled with the knowledge, skills and mind-set to enable them to become critical citizens, capable of challenging erroneous dominant powers and political ideologies, and ensuring the accountability of the government for its actions.

Critical genocide studies provides an important mechanism, not only in helping to promote civil liberties and democratic institutions, but also in halting cycles of political violence and repression, and promoting more positive policies for social change, social justice, sustainable peace, freedom and more meaningful national and community reconciliation. Cambodians must be educated to have courage to face the past – no matter how horrible – without fear of authorities. Through education for critical thinking and analysis, Cambodians in the 21st century can move past their horrific history in the 20th century and find ways of building a more positive future, rather than relying upon simplistic understandings of history given through surface stories in the political shadow.

Khamboly Dy is director of the School of Genocide, Conflicts and Human Rights at the Sleuk Rith Institute.