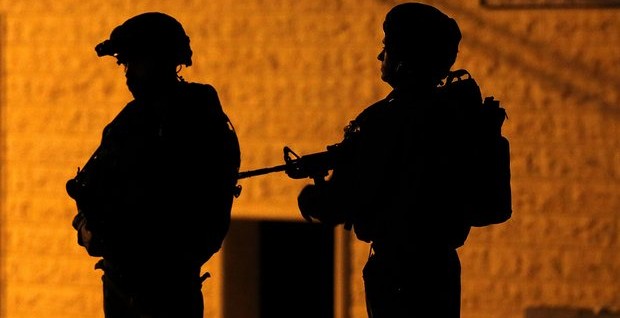 JERUSALEM — Israeli forces opened fire at a Palestinian car in the occupied West Bank early Tuesday, killing one Palestinian teenager and wounding four others, according to relatives and Palestinian officials. The teenagers appeared to be innocent bystanders who were hit while the military tried to halt Palestinians who were throwing stones and firebombs.

The military said its soldiers had been pursuing several Palestinians who were trying to hit Israeli cars on Route 443, a highway that cuts through the West Bank as it connects Jerusalem with Israel’s densely populated coastal plain, injuring three civilians, including a pregnant woman.

Palestinian officials identified the dead teenager as Mahmoud Rafat Badran, 15, from the village of Beit Ur al-Tahta, west of Ramallah, and said that two of his brothers, ages 16 and 17, were among those injured.

“Nearby forces acted in order to protect additional passing vehicles from immediate danger and fired toward suspects,” the military said. “From the initial inquiry, it appears that uninvolved bystanders were mistakenly hit during the pursuit.”

A military spokeswoman said later Tuesday that the military police investigation unit was examining all aspects of the episode, presumably including whether the soldiers involved had opened fire according to protocol. The shooting comes as an Israeli sergeant, Elor Azaria, is standing trial in a military court on a manslaughter charge after he fatally shot a wounded and disarmed Palestinian assailant in the West Bank city of Hebron.

Saeb Erekat, a senior Palestinian official, described the killing of the Palestinian youth as a “coldblooded assassination,” adding in a statement, “The international community has the responsibility to stop allowing Israel’s impunity for the crimes it commits against the occupied land and people of Palestine.”

Muhammad Badran, the father of one of the injured Palestinian teenagers from Beit Ur al-Tahta, Majed, said that his son had decided to go swimming with his cousins and friends in the nearby village of Beit Sira after breaking the Ramadan fast on Monday night, and that they had left in a taxi.

As they were driving home, he said by telephone, shots were fired at their vehicle.

“I don’t know if it was soldiers or settlers who opened fire and hurt our children,” he said.

Mr. Badran, who works as a building contractor in Israel, said that after receiving a call from a resident of the village around 1:45 a.m., he rushed down to the road and saw the wounded teenagers on the ground, bleeding.

He said that soldiers had put his son and one of the other teenagers in a jeep and had driven off, and that he had not received any more information about his son’s whereabouts.

The Israeli military said that three of the injured Palestinian youths were taken to a hospital in Ramallah and that the fourth, apparently Majed, was taken to the Hadassah Medical Center, an Israeli hospital in Ein Kerem, on the outskirts of Jerusalem.

The Palestinian Health Ministry said that the three teenagers in the Palestine Medical Complex in Ramallah had been shot in the head and chest, and had sustained serious injuries.

The three civilians who were believed to have been wounded by rocks were taken to Shaare Tzedek Medical Center in Jerusalem for treatment.

A hospital spokeswoman said the wounded included two Israeli men who also hold other citizenships and a pregnant Belgian. All three had light injuries and were released from the hospital.

The roughly 10-mile stretch of Route 443 that runs through the West Bank, constructed on land that was expropriated from the Palestinian villages, has a military checkpoint at each end, and for many Palestinians it has become a symbol of the injustices of Israeli occupation.