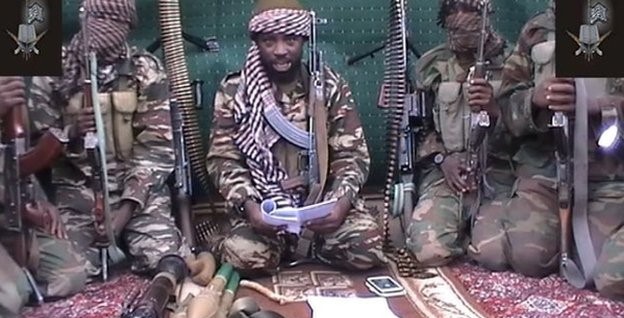 Boko Haram (literally translated as “Western Education is a Sin”) is a genocidal criminal movement led by an Islamist extremist, Abubakar Shekau, who has vowed to destroy every Christian school in Nigeria, and to carry out terrorist attacks on Nigerian government police and government officials.  It kidnapped over 200 girls from a Christian school in April 2014 and despite the Nigerian government’s efforts, none have been found. In 2014, Boko Haram killed an estimated 2,000 people in its jihad to expand its self-declared Islamic caliphate in northern Nigeria, an area with a heavy Muslim population.

On January 7, 2015, Boko Haram killed 2,000 Nigerian civilians by burning down the town of Baga in the north-eastern state of Borno. Boko Haram has sworn allegiance to ISIS, the so called “Islamic State” in Syria and Iraq, and is copying ISIS tactics of random brutality.   Boko Haram has attacked villages in Cameroon, Chad, and Niger, as well as in Nigeria.  Boko Haram may control up to six times more territory than ISIS.

Boko Haram, whose Arabic name, Jama’atu Ahlis Sunna Lidda’awati wal-Jihad, means “People Committed to the Propagation of the Prophet’s Teachings and Jihad” was founded in 2002 by Mohammed Yusuf in order to oppose Western education. Its objective has expanded to create an Islamic state in Nigeria. While it was not violent at first, it changed in 2009 when some of its members were arrested, which sparked a riot as well as an armed clash with the Nigerian Army that killed 800 people. In the wake of the 2009 riots, Boko Haram turned horribly violent.  To fund its operations, Boko Haram began robbing banks, stealing cash to buy heavy weapons.

Before Nigeria was established, Fulani jihads from 1804 to 1808 imposed Islam on the Hausa majority in the north, fusing the Hausa states.  British attempts at colonization were resisted, but were finally successful.  Resentment against Western influence has remained.  The northern population resisted activities of early Christian missionaries who used western education for evangelism.

Nigeria was created in 1914 from an amalgamation of northern and southern regions by British colonial authorities.  Since the Borno Sultanate and the Sokoto Caliphate, which ruled parts of what is now northern Nigeria, (as well as parts of the Republic of Niger, and southern Cameroon), fell under British control in 1903, there has been strong resistance to Western education among the Muslims of the area.

Anger against Western influence resulted in emergence of Islamist fundamentalism among people in northern Nigeria.  Mohammed Marwa, known as Maitatsine, who is considered by Boko Haram to be its inspiration, began working as a preacher in Kano, northern Nigeria.  He denounced Western education and claimed that reading any book except the Koran was sinful and a sign of paganism. He and his followers started riots and armed clashes during 1970s and 1980s, which killed an estimated 4,000 people including Maitatsine himself.

Nigeria is almost evenly divided between Christians and Muslims.  Until Boko Haram rebelled, religious fundamentalism has not been a defining characteristic of political divisions.  Maitatsine’s movement was among the early warning signs that religious tolerance was endangered, and that Islamic fundamentalism was finding a home in Nigeria.

Nigeria has a Federal system of government.  Under the Independence of Nigeria Act of 1960, Nigerian Muslims could not impose Sharia law in their states until 1999.  By the 1980s, some Muslim leaders began to demand imposition of Sharia law more quickly.

The Constitution of 1999 opened the door to the imposition of Sharia law by granting significant power to Nigeria’s states and creating a system of appellate courts to hear appeals from Sharia trial courts. The growth in support for Sharia and for abandoning the secular aims of the drafters of the Settlement of 1960 has transformed northern Nigeria.  Nigeria has always been a divided country plagued by weak governance, ethnic cleavages, and corruption.  Boko Haram was born in this context, with religious fervor growing in the Muslim north and finally manifesting itself in violent Islamist terrorism.

Featured image: Abubakar Shekau, flanked by his men, has declared a caliphate in areas he controls. Copyright: AFP