The Historical Background of Boko Haram   Boko Haram (literally translated as “Western Education is a Sin”) is a genocidal criminal movement led by an Islamist extremist, Abubakar Shekau, who has vowed to destroy every Christian school in Nigeria, and to carry out terrorist attacks on Nigerian government police and government officials.  It kidnapped over 200 girls from a Christian school in April 2014 and despite the Nigerian government’s

Boko Haram’s victims — now rescued but on the verge of starvation Kevin Sieff, The Washington Post  22 June 2016 Image: This March 7 photo shows Hamsatu, 25, and Fatima, 3, at the Dalori Internally Displaced Persons Camp in Maiduguri, Nigeria. Both had once been captives of Boko Haram. They did not know the fates of family members they had been separated from. (Jane Hahn for the Washington Post) NAIROBI -- Thousands of Boko Haram victims are

Nigerian Girl Abducted by Boko Haram from Chibok Is Found

Nigerian Girl Abducted by Boko Haram from Chibok Is Found Chris Stein and Dionne Searcey, New York Times 18 May, 2016 LAGOS, Nigeria — One of the girls kidnapped by Boko Haram more than two years ago during a mass abduction at a school in Nigeria has been found, community leaders in the area said on Wednesday. The girl, Amina Ali, was wandering in the forest when members of avigilante group lying in wait to ambush a Boko Haram camp came across

Chibok schoolgirl abducted and held by Boko Haram found after two years Brian Murphy, The Washington Post May 18 2016 Video: One of the more than 200 Nigerian schoolgirls missing for more than two years since their kidnapping by Boko Haram militants has reportedly been found alive near the Cameroon border. (Reuters) A young woman carrying a baby emerged Wednesday from the Ni­ger­ian bush with a story that began over two years ago: She was among

Victims of Boko Haram, and Now Shunned by Their Communities

Victims of Boko Haram, and Now Shunned by Their Communities Dionne Searcy, The New York Times  18 May 2016  Image: Ashley Gilbertson for The New York Times  DALORI, Nigeria — Zara and her little brother thought they were finally safe. After being held captive by Boko Haram for months, they made it to this government camp for thousands of civilians who have fled the militants’ cruelty. But instead of a welcome, residents gathered around,

President Buhari’s Corruption Plans Have Gone Down a Treat, But is There Too Much on His Plate? 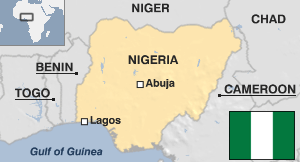 President Buhari's corruption plans have gone down a treat, but is there too much on his plate? Mail and Guardian 13 May 2016 Image: http://www.bbc.com/news/world-africa-13949550   Of all those in London at this week's conference on corruption, the show went to Nigerian president Muhammudu Buhari who cut a figure in his hat and robes. There were several heads of government including David Cameron and Afghan president Ashraf Ghani whose country

How to rebuild Nigeria after Boko Haram

How to rebuild Nigeria after Boko Haram Mannir Dan Ali, BBC Africa 10 May 2016   Image: Boko Haram has carried out random attacks on communities, Mannir Dan Ali, who edits Nigeria's Daily Trust paper, considers the hard task of rebuilding lives and communities now that the worst of the Boko Haram insurgency seems to be over. Nigeria's north-eastern Borno State covers 92,890 sq km (35,865 sq miles) - an area bigger than Portugal. It straddles

War-torn Nigerian town shows devastating legacy of Boko Haram Kevin Sieff  11 April 2015   Image: The scope of the horrors that took place in Gwoza, Nigeria, became apparent after the Islamist militants were driven out.   GWOZA, Nigeria — In the sprawling city that was Boko Haram’s headquarters, almost every building has been bombed or burned or looted. Schools and homes are littered with abandoned explosives and weapons. A ditch

Boko Haram: They were freed from rape camps. But their nightmare isn’t over.

They were freed from Boko Haram’s rape camps. But their nightmare isn’t over. By Kevin Sieff  3 April 2016    Image: Halima, 15, holds Hauwa, the baby of her friend Hamsatu, 25, who is sewing a prayer cap in their tent in Maiduguri, Nigeria. Both women were abducted, held captive and forced into marriage by Boko Haram. (Jane Hahn/For The Washington Post) MAIDUGURI, Nigeria — For months, they were kept in tiny thatched huts in the